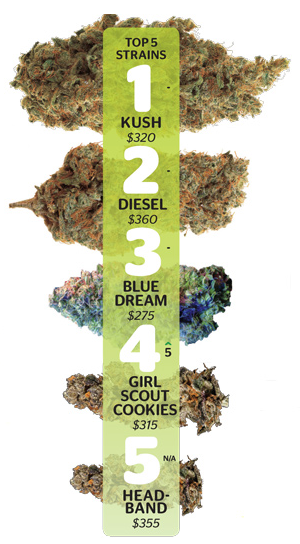 As states across the country continue to address the issue of legalizing marijuana, real time data compiled by a crowdsourced website shows how much people are paying for it on the black market, broken down by states, cities, and towns.

See How Much New Englanders Are Paying for Marijuana Below

“These crowd-sourced websites for unregulated prices might not be prevalent or necessary in New England — right now,” said Allen St. Pierre, the Executive Director of NORML — and Massachusetts native.

NORML’s mission is to “move public opinion sufficiently to legalize the responsible use of marijuana by adults.”

“Take however the scenario in Los Angeles, where there are over 800 medical marijuana dispensaries downtown alone,” St. Pierre continued.  “There are consumer-oriented webpages that enjoy a lot of traffic, because people in real time can use technology to determine real time prices.”

With Massachusetts in the midst of approving medical marijuana dispensaries, and Worcester County having narrowed down the list of applicants to 13, St. Pierre spoke with GoLocal about the situation unfolding in the Bay State — and what it might mean for marijuana prices.

“We won’t know how the situation in Massachusetts will unfold until it’s finalized. We what know is that Massachusetts is logically moving forward. They’re drawing from the example of the other 20 states,” said St. Pierre, regarding the other states that have approved medical marijuana.

A recent poll conducted by the Western New England University Polling Institute found that 74% respondents in Massachusetts were in favor of legalizing medical marijuana. The poll showed that prior to approval of the measure in 2012, the support level was at 63%.

Nationally, a Gallup poll showed that 58% of Americans were in favor of full-scale legalization; however, the Western New England University poll found that only 41% of Massachusetts respondents would approval legalization — and 51% would be against it.

St. Pierre talked to the situation unfolding in Colorado. “The price is dropping like a rock there, ” he said. “The last time I went, the average price was $135 an ounce. Now that there’s regulations — and taxation — the distributors are seeing their profit margin getting cut.”

Last week, voters in Colorado approved a 15% excise tax on marijuana sales, and a ten percent sales tax on legalized marijuana, which was approved in the state in 2012.

“Lawmakers might take revenue into consideration,” said St. Pierre regarding some states elected officials at legalization. “It’s really a product of this economy that’s driving that discussion, the fact that we find ourselves in crushing economic times.”

Returning to the issue of prices, St. Pierre said, “In the end, I don’t think there will be medical marijuana market operating parallel to a legal, regulated marijuana market.”

Kevin Sabet with Smart Approaches to Marijuana (SAM) addressed the issues of tax revenue as part of the legalization conversation.

SAM, which “believes in an approach that neither legalizes, nor demonizes, marijuana,” is currently chaired by former Rhode Island Congressman Patrick Kennedy.

“States may see [revenue] at first — just like they saw alcohol, tobacco, and the Lottery that way — but they are in for a rude awakening,” said Sabet. “We know, for example, that every $1 gained alcohol and tobacco tax revenue costs society $10 — in the form of low productivity, accidents, and health care costs. Why should we expect marijuana–which combines the intoxicating properties of alcohol with the lung damage associated with smoking — to be any different?”

Sabet continued, “Society will have to pay for increased regulations (including increased law enforcement and spending on new government bureaucracies to manage legalization) along with costs associated with increased car accidents, school dropouts, workforce problems, etc. Even though a minority of all of the marijuana users will have problems (just like a minority of overall drinkers have major alcohol problems), that small number of users will incur a huge cost to society.”

Sabet compared the legalization of marijuana to the tobacco industry.

“I think the pro-side will continue to make the scientifically dubious argument that legalization keeps drugs away from kids (since drug dealers don’t ask for ID) even though we know that as a substance is more widely available, normalized and commercialized, it becomes used and abused. Alcohol is a case in point: kids have easy access to beer even though its use is supposed to be illegal until age 21. I think the anti-side will rightfully express doubts that the commercial, legal market won’t exploit kids and target vulnerable populations,” said Sabet.

“There is middle ground, though, found in the idea that we don’t have to jail low-level marijuana users or saddle them with criminal records while at the same time not legalizing and commercializing a new addictive substance. We have dealt with Big Tobacco for 80 years – why would we want to usher in Big Marijuana now?

St. Pierre took issue with how the issue was presented by SAM, who he said he hoped he could “work together with” at NORML.

“They’re conflating marijuana and tobacco. — I’m glad to see tobacco use being halted, but we didn’t do it by prohibition,” said St. Pierre.

“If we want to see Americans make the choice to use marijuana or not, we have a model in place, which is a progressive taxation model,” he continued.  “A vice tax does deter people, and especially youth.”