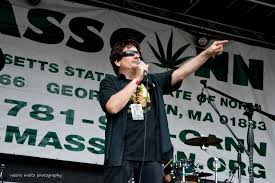 The face of cannabis seems to be changing each time you blink.  As the potential
for fortunes to be made is realized by more people, the motives behind cannabis
activism must be questioned more than ever.   Before legal cannabis was
profitable, the grounds for promoting cannabis use were purely based upon civil
liberties and the freedom to choose.  As the green rush sweeps across the
nation, there is no shortage of new age activists interested in the progression
of cannabis laws that will satisfy the strategy of their corporate backbone.
The weekend of the Boston Freedom Rally was the last time I saw my close
friend Mike Malta. Michael was one of the last of a dying breed of activists.
He was truly for the people and fought for those that needed a voice.   As I
reflect back on his career as a dedicated cannabis activist and all of the great
things he was, I also think of all of the things Michael was not.  He was not
influenced by investment money or corporate tactics.  He never exploited his
personal illnesses for sympathy or popularity. Michael also never used the
misfortunes of others as a marketing plan.  The same weekend I last saw my
friend, I was introduced to a woman that represents of the new breed of
activist.  Upon hearing her story and reasons for supporting cannabis, it was
clear to see that she was only around for the money and personal gain.  After I
did a bit more homework on the self proclaimed Martha Stewart of Marijuana and
learned about all the things she is, I thought about all of the things she is
not.  She was not in tune with anyone outside of her tax bracket.  Her
compassion is not authentic; it can be purchased and will expire when the host
is no longer attractive.  Her motives are not transparent; however one only
needs to look at her website and product links to see what the driving factor is
behind her activism.   As cannabis transitions into a legal and regulated entity
across the nation, America needs more Mike Malta and less Cheryl Shuman or we
will surely see compassion take a backseat to corporate profits. Because of all
the things she is, Cheryl Shuman could never be anything Mike Malta was.   While
her fifteen minutes will expire as fast as they began, the scars she leaves in
the community will linger as a reminder of everything an activist should avoid
doing. The truth and personal freedoms are what motivated Mike; the potential
for riches didn’t turn him on very much.  It saddens me to no end knowing the
King of Pot is gone with no one to fill his shoes.   It scares me to think about
whom we are left with and the money that funds them.