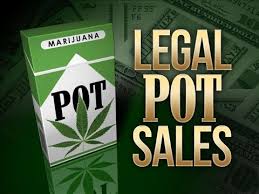 Central City [Colorado] is used to making history. The Rush to the Rockies got its start in May 1859, when John Gregory made the first lode discovery on Clear Creek. The town sprang up right above that find and grew so fast that it almost became the state capitol; today it’s home to the historic Teller Opera House, Victorian buildings and casinos made possible by Colorado voters. And now Central City has made more history, as home to the first business granted a recreational marijuana retail sales license not just in Colorado, but the world.

Annie’s, the recipient of the license, is housed in a historic building at 135 Nevada Street that dates back to 1864, was gutted by the fire of 1874, then was rebuilt. Over the years, it’s been everything from a saloon to a garage to a tourist-trap jail exhibit. In 1992, it became the first place to be granted a casino license in Colorado: for Annie Oakley’s Casino. (There’s no evidence that the famous sharpshooter ever set foot in the structure, although her mentor, Buffalo Bill, did put on a show in the Teller Opera House — so it’s possible that Annie Oakley at least saw Central City.)

Like so many of the mom-and-pop casinos that opened at the start of gambling, Annie Oakley’s closed when bigger casinos moved into town. The spot then reopened as Annie Oakley’s Emporium, a convenience store. And it became a lot more convenient a few years ago, when it started stocking medical marijuana along with groceries and liquor.

This past April, the business was sold to Strainwise, which now has eight dispensaries in Colorado, with locations in Denver, Idaho Springs and Wheat Ridge as well as Annie’s. The plan is for all eight to get retail licenses, so that they can sell recreational marijuana as well as medical marijuana starting January 1, explains Strainwises’s Erin Phillips.One of the Denver dispensaries, the Grove, was the first to have a recreational-sales hearing in Denver, she notes. (Under Colorado rules, a local hearing comes after the state has signed off on a recreational sales license application — for which only approved MMJ facilities can currently apply.) And yesterday, three of the five Strainwise centers in Denver were all approved for their recreational sales licenses.

But by then, the Annie’s already had its license. Central City had nabbed another historic first by “processing it through a lot faster,” says Phillips.

Then again, the Central City chief of police, who delivered that first recreational marijuana sales license, didn’t have far to go: The police station shares a wall with Annie’s.

“It’s the same old bureaucratic piece of paper,” Phillips says of this first license. “But we might put it in a fancy frame.”

DEA Marijuana Seizures On The Decline