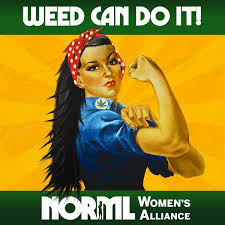 “There’s an air of cognitive dissonance about it, that a woman, especially a nurturing, professional woman, could both smoke pot and not be Jim Breuer in Half Baked was, to many, a revelation.” Emily Dufton, The Atlantic (10/28/13)

Emily Dufton does an excellent job identifying the cultural challenges and social setbacks that are experienced by female cannabis consumers on a regular basis.  The issue of women and weed has become a hot topic recently, and being on the forefront of this push for female engagement has been nothing short of fascinating.  The emergence of independent, mainstream professional women becoming more outspoken about their cannabis use has prominently challenged traditional stereotypes, and started the long-overdue process of reframing gender norms.  As marijuana goes mainstream, its cultural connotations will continue to evolve.  In return, more women will feel comfortable coming out of the cannabis closet.

A little over 4 years ago, I wrote an aptly named blog; Because Women are NORML Too, in response to the overwhelming interest to Marie Claire’s famous Stiletto Stoners article.  In that post, I noted, “The normalization of recreational cannabis consumption is not just happening with men, which is what most people think of when they think of pot smokers.  Women, who are not necessarily left out of the movement, are rarely recognized as a major demographic that is essential for the reform effort to push forward in a truly legitimate fashion.”   It’s amazing to see how far we’ve come.

Since then, there has been a major effort on behalf of NORML and the movement to identify and close the gender gap.  Reformers are acutely aware that in order to succeed in ending blanket prohibition, female outreach has to be a key component to their advocacy work.  Women, a significant demographic were largely responsible for bringing down California’s Proposition 19, but were also a key factor in the passage of Washington and Colorado’s legalization initiatives in 2012.  In fact, campaigners in Colorado and Washington spent a significant amount of time and resources cultivating the female vote. Though a gender gap still exists nationwide, it is shrinking, fast.

While great strides have been made culturally and politically, there still remains a great deal of curiosity and intrigue surrounding female cannabis consumers.  Many want to know, who are these women who smoke pot?  Why do we smoke pot? Is it because we are sick or in pain, need a crutch or because we simply want to relax with a substance that has less side effects than alcohol?  Why don’t more of us speak out about it?  Why aren’t there more women leading the fight?  Can a responsible mom still smoke pot?  It’s truly amazing how a single chromosome can alter the entire construct and perception of a certain behavior.  One can write volumes on each of these questions, but the interest clearly comes from the disconnect of deeply rooted gender norms regarding women, intoxication, and our various roles in society.  Many of these abstract components have been mulled over time and again by different authors and publications.  But if we look at our current policies, some of these questions are answered in very real terms.

For example, a mother who chooses to unwind with a joint after her child has gone to bed is no more a danger to her child than one who chooses a glass of wine.  Yet, our laws say otherwise.  A mother who smokes pot is in constant danger of losing her children because child protective services maintain the false presumption that this behavior (or the mere presence of pot) poses a threat to the child’s safety.  This is just one example of how the culmination traditional gender norms and our current marijuana policies play a real and tragic role in our society.  The proliferation of government agencies across the country removing children from safe, loving homes for the mere fact that a parent is a cannabis consumer, even in states with a legal medical marijuana program, or where marijuana possession is no longer a criminal offense is not just an abstract discussion, but a tangible, legal issue that requires immediate attention and an expedited solution.  Support for marijuana legalization is higher than ever before, and as the political winds change, so too will the scope of the marijuana culture.  Women, and our relationship with marijuana will have political and social implications for years to come, and it is therefore up to us to make sure we take a leading role in defining what those outcomes will be.