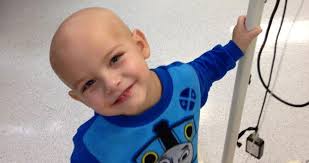 One year ago, 3-year-old Landon Riddle was diagnosed with leukemia. Under doctors’ orders, his mother Sierra Riddle began treatment for her young son: aggressive chemotherapy and radiation.

But while still living in Utah, Sierra watched her little boy become violently ill from the chemotherapy — Landon suffered nerve-damage in his legs, nausea that led to vomiting dozens of times a day, intense pain and at one point went 25 days without eating following the treatment, according to CNN.

“Around the clock, he was usually on liquid morphine, Ativan, Promethexane,”Sierra told CNN back in July. “And it just really didn’t seem to be helping.”

Feeling like her family “didn’t have anything left to lose” she looked into medical marijuana treatment. She moved her family to Colorado Springs, Colo. to benefit from the state’s marijuana laws and started to give Landon liquid forms of both Cannabidiol, or CBD, and Tetrahydrocannabinol, also known as THC.

“Within four weeks we could see the improvement,” Sierra told KRDO.

Users of medical marijuana have said that THC, the psychoactive ingredient in marijuana that is associated with the “high” sensation, can also be an effective pain killer as well as inhibit feelings of nausea.

And research from a pair of scientists at California Pacific Medical Center in San Francisco suggests that CBD, the non-toxic, non-psychoactive compound found in the cannabis plant, could actually stop metastasis in many kinds of aggressive cancer.

Sierra swapped chemotherapy for cannabis therapy and has seen her son return to his old energetic self and his cancer go into remission. Her decision to use medical marijuana as treatment for her son’s cancer has raised some eyebrows in the traditional medical community — so much so, that one Colorado doctor reported Sierra to Human Services for refusing chemotherapy for Landon.

“They are not only forcing me to do something against my will as a parent, they are forcing me to make my child sick,” Riddle said to CBS4.

Childhood cancer remains the leading cause of death by disease among children in the United States, according to Children’s Hospital Colorado. In a statement toCBS4, they write that 25 percent of childhood cancers are acute lymphoblastic leukemia. The survival rate for these patients treated at Children’s Oncology Group is over 90 percent and is attained with two-to-three years of chemotherapy.

Riddle says that no matter what people think about her decisions, the plain and simple truth is that marijuana has helped her son.

“As soon as we started taking the oil, his platelets have been a regular healthy person’s level and [doctors] can’t understand why,” Riddle told CNN.

As unusual as it may seem, the Riddle family is not alone in choosing medical marijuana treatment for a child with a severe illness. In 2012, then 7-year-oldMykayla Comstock of Oregon, who was diagnosed with acute lymphoblastic leukemia, made headlines for her use of medical marijuana to combat the side effects of chemotherapy.

The family of 6-year-old Charlotte Figi were the subject of a CNN documentary earlier this year regarding their daughter’s use of medical marijuana to help treat the debilitating seizures that result from her rare form of epilepsy.