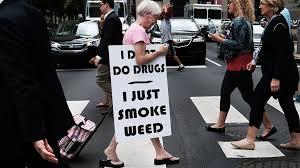 Members of the group Michigan Moms United gathered outside the state Department of Human Services last week, along with other groups protesting the controversial removal of 6-month-old Bree Green by Child Protective Services from her Lansing family.

The child’s father suffers from seizures and is a medical marijuana patient; her mother is a registered caregiver. An Ingham County Court referee ruled that Bree was in danger because her mother had marijuana in the house and someone with a gun could break in.

“There is no reason to take children from the arms of loving, responsible parents,” says Charmie Gholson, founder of the group. “We’ve been putting up with this for so long. They’ve taken our stuff, our property, our liberty — and they’re taking our children. They’re not taking our children anymore.”

A few days earlier, at a monthly meeting of the Michigan chapter of Americans for Safe Access, ASA executive director Steph Sherer joined state director Brandy Zink at the head table, along with a few other women who were there to tell their stories.

One of them, Ashley Duval, discussed how her father, a kidney and pancreas transplant patient who also has glaucoma and had heart bypass surgery, is not getting the care he needs in a federal prison medical facility. On one occasion, it took him more than two days to see a nurse practitioner for his chest pains; she is sure that if he has to serve his 10-year sentence, he will die in prison.

These women and others are part of the female voices becoming more prominent in the fight against marijuana prohibition. Women are traditionally the caretakers and caregivers in families, and women are speaking out about how this prohibition tears apart families.

Mother bears and tiger mothers have been celebrated in our culture for their ferocious defense of their young. Now mothers, daughters and sisters are standing up to protect their families in the War on Drugs.

Sherer, who founded ASA 11 years ago in California, in response to federal raids on patients and caregivers, was here to lobby the state legislature and take part in a benefit supporting HB4271, which would allow medical marijuana provisioning centers in Michigan.

“People are quick to point to men as experts,” Sherer says. “Those most affected by policies should be the ones who have something to say. Women as caregivers help ill individuals. That applies to medical cannabis too. They’re not only caring for people, but also making sure that they have their medicine. If you are taking care of someone getting chemotherapy treatments, the last thing you want to do is be running around seeking cannabis from an illegal marijuana dealer.”

Women have probably been associated with cannabis as long as people have been using the plant. The face of marijuana activism in the United States over the past several decades, however, has been mostly male. Polls have consistently shown that men have a more favorable attitude to marijuana than women.

What’s more, a recent headline on a Salon.com story adds a little perspective, reading: “Why women potheads still feel ashamed,” with the subhead, “Many men are open about their weed use, but women risk getting judged.”

“I don’t know that it would be shame as much as women feeling the real stigma and discrimination applied to the medical cannabis patient includes losing your children or going to jail,” Sherer says. “Potentially women have had more to lose.”

Whatever the reason, as polls find fewer women supporting marijuana use, the women who are talking about it are becoming more and more vocal.

“I’m thrilled to see that,” says Zink, who uses medical cannabis to control her epilepsy. “As a woman who has been involved in the movement since 2001, I’m thrilled to not be the lone female voice out there. I think that’s certainly natural with medical marijuana. Women are traditionally the caregivers of the children and for parents who may be sick. That’s a natural part of our society. There are many compassionate men who are in this, but there is a perceivable risk for women who speak out. Mothers and grandmothers, we don’t want to see our children with criminal records. We need to be able to use cannabis without having our children taken away from us. The only way to change the system is to speak out and use your voice.”

Zink pointed out that women were influential in repealing the prohibition of alcohol. That’s true. Pauline Sabin hated the hypocrisy of politicians who publicly supported Prohibition yet drank cocktails with friends behind closed doors.

In 1929, she founded the Women’s Organization for National Prohibition Reform, which had 100,000 members within a year; by the time Prohibition was repealed in 1933, it boasted 1.5 million members. That’s something politicians pay attention to.

A more recent example of women’s power to bring change is Mothers Against Drunk Driving. Since MADD was founded in 1980, the organization claims to have cut drunk driving by 50 percent. The group was involved in lowering the standard blood alcohol level for driving to .08 percent and helped create tougher drunk driving sanctions across the nation.

If women marijuana activists are as successful as those ladies, the terrain around here will be significantly different for marijuana users. There’s already evidence. Washington state’s legalization effort was led by Alison Holcomb. And the weed world recognized broadcast journalist Cheryl Chodun of WXYZ as an outstanding activist at the 2013 Hempfest. Chodun is working to pass the Ohio Cannabis Rights Amendment.

The buds or flowers of the female cannabis plant are the part prized by marijuana users — medical or otherwise. That’s where the highest concentration of THC, CBD and other healthy impact cannabinoids is found. Maybe paying more attention to the females of our own species can have a healthy impact. Cherish the ladies, and pay attention to them.