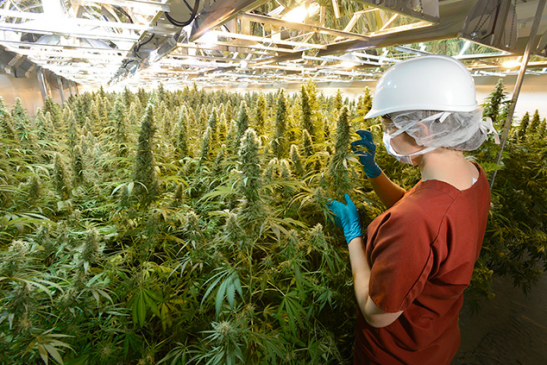 “As the sole supplier to Health Canada for the last 13 years, patients and physicians have come to trust the safety and efficacy of the Prairie Plant Systems (PPS) pharmaceutical-grade cannabis,” PPS CEO Brent Zettl announced in a press release this morning. “We are very pleased to have been awarded the first two licenses under the new medical marijuana regulations.”

As well as issuing a license for PPS, Health Canada gave a second license toCanniMed Ltd., a subsidiary of PPS, which, according to the press release, “will be the distribution and support hub for patients and physicians, as well as the brand name of the three pharmaceutical-grade cannabis products that will be made available as soon as physically possible – CanniMed® 17.1, CanniMed® 12.0 and CanniMed® 9.9.”

As part of Health Canada’s new regulations, all personal medical marijuana home-growing operations will be made illegal as of April 1, 2014. All medical marijuana patients in Canada will then be forced to purchase their medicine by mail-order from one of the government-licensed companies, of which PPS and CanniMed are the first – and only at this time.

“Patient safety is our primary focus,” Zettl said, “which means that patients and their healthcare professionals can trust our consistent and reliable product every time. We have a quality control process with 281 points of control, ensuring that there is no variability, giving patient’s confidence in dose consistency.”

If these are truly concepts now associated with Prairie Plant System and its products, the company must have turned over a new leaf.

In 2001, the company managed to secure a $5.7 million cultivation contract – the first and only of its kind – to produce med pot for distribution to the public as part of the Canadian government’s MMAR program. In a joint venture with the Hudson Bay Mining & Smelting Company, PPS established a large growing operation 365 metres below ground in a Flin Flon, Manitoba mine.

The historically successful company then seemed to get off on the wrong foot when it came to medical marijuana. Despite claims PPS was growing a top-quality product by CEO Zettl, Health Canada repeatedly delayed the distribution of the company’s finished product.

Once the program was actually up and running, patients receiving the medicine began to complain about the low quality of the PPS product. Patients called the marijuana “weak” and “disgusting”, and described it as ground-up mix of buds, leaves and stalk.

Beginning in 2003, the Canadians for Safe Access (CSA), the country’s largest medical marijuana patients rights organization, acquired a sample of PPS’s pot and began testing. What they found was downright scary.

The group published an Open Letter of Concern for the Health and Safety of Canada’s Medicinal Cannabis Community – a detailed study of PPS’s cannabis – that raised a number of serious concerns about the quality and safety of the product.

“Upon initial physical examination, it became apparent that claims by PPS and Health Canada that the PPS cannabis was 10% THC seemed overly optimistic.” the letter states. “The product was of very fine grind with visible stalk and stems peppered throughout and very little detectable trichome development. When put under flame, it produced a dark smoke with an unpleasant taste and odor. The cannabis burned very poorly and left a thick black residual ash, immediately suggesting inadequate nutrient flushing. This was later confirmed by an examination of tests conducted by Norwest labs for PPS, which show unusually high levels of phosphorous, calcium, and magnesium all of which are ‘flowering’ fertilizers used at the end of growth cycle, and are typically to blame for the poor combustion and acrid taste of inferior quality black-market cannabis.”

Numbers acquired by CSA through an Access to Information Act request showed “that out of the initial 93 people who ordered the cannabis between September 2003 and the end of March 2004, nearly 30% physically returned it to Health Canada.”

So much for “efficacy”.

So much for “trust”.

Adding to PPS’s growing problems were concerns about the safety of their growing facilities deep underground in a zinc and copper mine in Flin Flon. “As a result of over 80 years of mining and smelting,” the CSA wrote, “a number of official Conservation Canada, Natural Resources Canada and Environment Canada reports suggest that Flin Flon and the surrounding region is one of the most environmentally contaminated areas in North America.”

According to a MiningWatch Canada report released in 2001 , “the sheer size of the contaminated area in Flin Flon makes it impossible to remediate. In particular, there is a large volume of tailings that blow in the wind, and the metal content (copper, cadmium and lead) makes it difficult for vegetation to establish. Community concerns have historically not been adequately addressed, and much information, including that collected by Health Canada (e. g., toxic metal levels in blueberries) has not been made available to the residents of Flin Flon…”

CSA commissioned a heavy metal analysis of PPS’s marijuana that was carried out by an EPA and CAEAL certified lab in September of 2003. “The results of these tests showed that the PPS cannabis was high in both lead and arsenic,” CSA said.

Thanks to an Access to Information Act Request, the patient’s rights group also received a copy of “every heavy metal test conducted by PPS and Health Canada up to and including March 9th, 2004.” The tests showed lower concentrations of arsenic and lead than earlier tests but “examination by independent researchers suggested that elevated levels of manganese and phosphorous in the PPS cannabis may be of some health concern, particularly when they are inhaled into the lungs,” CSA said.

After being informed by CSA about tests showing the presence of potentially life-threatening heavy metals in its medical marijuana, Health Canada spokesperson Jirina Vlk said the government’s own tests showed heavy metal concentrations in PPS cannabis were “similar to those found in Canadian tobacco, and well within allowable limits,” CSA said. “When pressed as to what these ‘allowable limits’ might be, she admitted that there are currently no legal limits to heavy metal content in either cannabis or tobacco in Canada.”

In order to kill hazardous bacteria, the PPS marijuana is bombarded with Gamma radiation. According to Health Canada’s website, “The product has been irradiated by gamma irradiation to reduce to undetectable levels, potentially harmful bacteria and microbial load which may cause spoilage of product. The lowest dose required is utilized for the irradiation process (i.e. 10 kilogray – standard level for herbs and spices), ensuring that the chemical characteristics of the marihuana product are not altered.”

“Gamma irradiation is a controversial decontamination technique that has never been studied for safety in smoked or inhaled products anywhere in the world,” CSA wrote in its letter. “Although it effectively destroys most bacteria, it does not destroy viruses or mycotoxins, and is often used to cover up biological contamination resulting from poor production, processing or handling practices. One of the bi-products of gamma irradiation is the production of Unique Radiolytic Products, which are a new class of chemicals resulting from irradiations that are not otherwise found in nature. Of significance in the gamma irradiation of whole plant cannabis is the potential production of cyclobutanones, which are toxic, carcinogenic chemicals that form when fats are subjected to gamma irradiation, and which have been directly linked to the development of colon cancer in rats. In addition, gamma irradiation has been shown to destroy terpenes like myrcene and linalool, which have known therapeutic properties and are found in high concentrations in some strains of whole-plant cannabis.”

So much for “patient safety”.

The Future of Medical Marijuana in Canada

At this point, Prairie Plant Systems and its subsidiary CanniMed are the only companies licensed to provide commercial medical marijuana to Canadian patients (find out here how to get yours).

Medical marijuana dispensaries, though plentiful across Canada in cities like Vancouver and Toronto, are still actually illegal.

It’s possible PPS have changed their ways and will produce quality strains of marijuana in the future, though comments about a “consistent and reliable product every time” have been heard before and never followed through on.

We called Prairie Plant Systems for a comment today and were promised a call back, but that was also not followed through on.

Hopefully, the government is just getting the license-issuing equipment warmed up, and we’ll see the opening of the MMPR program to other commercial providers. An open and free market could lead to a better and safer product where potentially dangerous products are no longer passed-off as medicine.

Until then, Canada has a Prairie Plant Systems Medical Marijuana Monopoly.