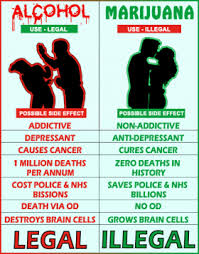 Last week the National Institute of Drug Abuse released a statement denying that pot is less toxic than alcohol, which resulted in cries of dismay from those at the HT offices and pot smokers nationwide. We decided to come up with a list of just some of the reasons weed wins over booze:

1. Marijuana Curbs Brain Damage Caused by Drinking
Unless you’re seriously in denial about alcohol’s negative effects, you’re probably aware that alcohol is less than good for your brain. Marijuana, however, may actually help prevent alcohol-associated brain damage and treat depression.

2. Marijuana May Help Treat Cancers Caused by Alcohol
Alcohol consumption is carcinogenic, and contributes to head and neck, breast, liver, esophageal and colorectal cancers. In fact, more than 19,500 cancer deaths in 2009 were deemed alcohol-related. Cannabis has been proven to help treat cancer and its symptoms.

3. Violent Behavior vs. Utter Chillness
Whether it’s used as an excuse for or directly causes aggression, alcohol more than any other substance promotes violent behavior. In case you’re unaware, marijuana tends to chill people out.

4. Alcohol Addiction is Extremely Dangerous
Alcoholism is an international problem, and withdrawal can lead to death or permanent brain damage. Cannabis addiction exists, but it is less harmful and generally less severe than addiction to other substances.

5. One Kills People. Guess Which One.
The first four points highlight alcohol’s lethality, but they don’t tell the whole story. Alcohol abuse kills 2.5 million people worldwide each year. The green stuff has led to exactly zero recorded deaths. Ever.

7. One Has Legitimate Medicinal Uses
Marijuana has a long, long list of physician-approved medical uses and the list is growing. Other than red wine’s ability to lower blood pressure, alcohol does just about nothing positive for a person’s health.

8. Drunk Sex is Sloppy, High Sex is Tingly
Alcohol decreases your ability to perceive stimuli. That can be a good thing when you’ve just faceplanted at a party and want to play it off like nothing. Losing feeling when you’re getting intimate, however, is pretty lame. Enter marijuana, which, as our very own Hypatia Lee can attest increases sensitivity and can improve sex.

9. Long Term Alcohol Abuse Could Kill You
Long-term alcohol abuse can lead to liver failure or other life-threatening conditions. Marijuana’s effects over a lifetime are still not entirely understood, but they do not include any of the potentially lethal ailments caused by alcohol.

10. Drunks Decisions Bad, High Decisions Slow
Alcohol leads to risky decision-making, period. That can be fun sometimes but dangerous at others. Scientist’s have yet to fully grasp marijuana’s effects on decision making, but this study shows that smokers more or less come to the same conclusions as sober peeps. They just take a little bit longer to arrive at those conclusions.