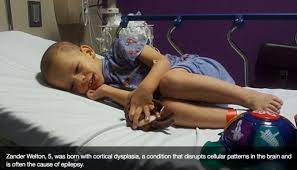 Zander Welton, 5, was born with cortical dysplasia, a genetic defect that disrupts cellular patterns in the brain and is often the cause of epilepsy.

Zander had his first seizure when he was 9 months old and now has them weekly. His parents, Jennifer and Jacob Welton of Mesa, Ariz., said they had tried multiple treatments, including various medications, brain surgery and even shock therapy, to help Zander.

Zander’s cortical dysplasia, combined with autism, has limited his speech to grunts or squeals, according to ABC affiliate KNXV-TV in Phoenix. He lets his parents know he is thirsty by bringing them an empty cup.

“If he’s sick, we have no way of knowing,” Jennifer Welton told  KNXV-TV. 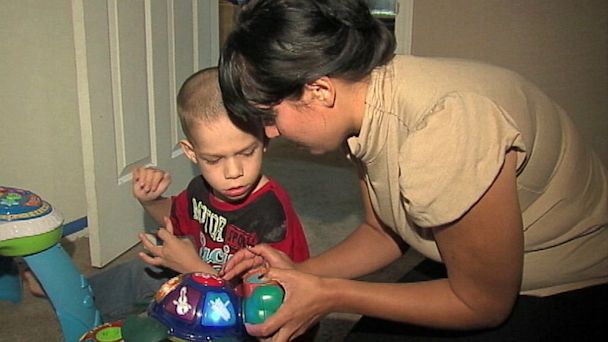 But Zander’s treatments have not completely stopped his seizures, according to his mother. She told KNXV-TV that while his medication helped lessen their severity, they made him more combative.

The severity of Zander’s seizures can vary greatly. Sometimes only his eyes twitch, while other times the seizures are so severe Zander’s entire body stiffens, and he stops breathing, Welton told KNXV-TV.

When Jennifer and Jacob Welton saw videos of other children who appeared to be thriving after they’d been  treated with medical marijuana, they pursued a medical marijuana card for Zander, and eventually found a doctor who was willing to treat Zander’s epilepsy that way.

Once they receive their card, the Weltons said they would treat Zander with cannabidiol oil, or CBD, a chemical found in marijuana.

“I wouldn’t even be thinking about this if it didn’t do something beneficial for him,” Jennifer Welton told KNXV-TV. “I don’t want him stoned. I just want him better.”

But  the effectiveness of treating epilepsy with CBD has not been studied in humans, only in epileptic animals.

Dr. Orrin Devinsky, a professor of neurology and director of New York University Langone’s Comprehensive Epilepsy Center, said although CBD has not been found to be an effective treatment for epilepsy, it was licensed in 22 other countries as a safe treatment for patients with multiple sclerosis spasms.

Devinsky said that  for patients who have had little success in treating their seizures with other medications, CBD could be a last resort.

But  Dr. Steven Wolf, director of Pediatric Epilepsy at Beth Israel Medical Center in New York,  said that parents should be wary of using CBD to treat epilepsy pending further studies. Wolf said that doctors didn’t yet know if children would build up a quick tolerance to CBD or if it would ultimately prove ineffective in treating seizures.

“I can say if this was my kid and if there was a possibility it would work, I would certainly want to know,” said Wolf. “This is interesting, but this needs investigation.”

Wolf said he had heard of some parents who’d given their children CBD to help treat specific forms of epilepsy, including epileptic seizures caused by cortical dysplasia, like Zander’s. Parents reported that the drug had helped their children and caused no serious side effects, said Wolf.

According to Wolf, two studies are currently recruiting patients to test the effectiveness of medical marijuana in treating epilepsy, but until those findings are known,  Wolf advised caution.

To  qualify for the program, two doctors must approve treatment, the minor’s parent or guardian must be designated as a caregiver to receive the medical marijuana card and the designated caregiver must live with the patient.

“The epilepsy science community is willing to look at this,” said Wolf. “There’s a lot of questions [but] it’s exciting when you can find a new medication. I hope it works.”