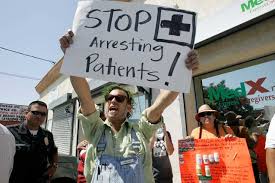 When I was in the graduate school portion of the Medical Scientist Training Program at the University of Washington in the Department of Geography, I had an opportunity to work with an intrepid defense attorney by the name of Douglas Hiatt, who brought me face-to-face with major health and human rights cases of persecuted, ill and disabled patients who were caught up in the federal-state conflict on medical marijuana. While the story I share below is from 2005, and was covered by the AP wire, it seems it is only in this age of majority support for ending the federal war on marijuana, when there is still doubt being expressed about the severity of marijuana prohibition enforcement, that people may be able to read and appreciate the full medical details of the following case. I did try to submit the write-up below to medical journals several years ago, but it seems like they were not yet willing to listen. Please lend me your ears and consider the consequences of a federal health policy built on denial of scientific fact of the medical utility of herbal cannabis. The pictures below are courtesy of John Brecher, independent photojournalist. I use the term “prison extraction” in the spirit of Dr. Paul Farmer, who used this term to describe in medical terms his efforts to free from jail local Haitian health workers who were swept up in politically motivated crackdowns.

***
To safeguard their health and quality of life, patients with debilitating chronic pain require special accommodations and protections in society, a principle which the field of physiatry has helped to establish and champion in the decades since its founding. I came face-to-face with the consequences of the social neglect of such protections as an MD/PhD student at the University of Washington, on October 11, 2005, while sitting directly across from a suffering chronic pain patient, who was separated from me by a semi-opaque metal screen. Through the course of a brief interview and later conversations, I learned that the patient, 39-year-old Mr. Tuck, was an army veteran in his early forties who had sustained a severe injury from a high impact fall in 1987 during a Latin American drug war-related military operation while attempting to perform a parachute jump from an airplane. The parachute did not unfurl, causing him to hit the ground supine at approximately 100 mph, leaving him with an incomplete spinal cord injury.

Following a year-long hospitalization at Walter Reed Army Hospital, 13 spinal surgeries, and a re-injury in a motor vehicle turnover collision, Mr. Tuck developed ‘failed back surgery syndrome’. He suffered from severe daily chronic pain, a neurogenic bladder requiring intermittent self-catheterization, and chronic muscle spasms. He managed his debilitating symptoms with prescribed use of morphine and benzodiazepines. He reported that his morphine dosage had not escalated over 16 years of daily use because he had also relied on the palliative and proven analgesic properties of whole plant cannabis as an adjuvant medicine for pain relief. Cannabis is a cannabinoid botanical medicine whosemechanism of action is centered at the body’s endogenous cannabinoid receptors, the most abundant G-protein coupled receptors in the brain, which are also expressed on peripheral nociceptors, spinal interneurons, immune cells, and other tissues. He attributed his ability to successfully transition from being wheelchair-bound to becoming ambulatory by adhering to his morphine + cannabis pain management regimen. For cultivating cannabis plants and providing himself and other authorized patients with this botanical medicine, Mr. Tuck’s home in Humboldt County, California was twice raided, and he was later arrested, as the laws governing medical cannabis delivery at that time lacked sufficient respect by law enforcement officials. The disrespect went further, as Mr. Tuck’s lawyer advised him in no uncertain terms that if he were to be incarcerated under the custody of government officials at any level, he would be denied use of his prescribed opioid medication, not to mention his medically authorized cannabinoid botanical medicine.

This prospect terrified Mr. Tuck, and in the midst of worrisome legal proceedings in 2001, he fled to Canada and sought asylum following his arrest, as the medical utility of cannabis had recently been federally recognized there. Unfortunately, his petition for asylum was ultimately rejected by the Crown, and he was subsequently abruptly taken into custody by Canadian federal police from a Vancouver hospital’s emergency department where he had been receiving treatment, while lying on a gurney and with a Foley urinary catheter still attached. He was taken to the national border and handed over to US Marshals who then transported him to a Whatcom County Jail in Washington State. He stayed there over the course of three days, was denied his medications just as he had feared, and developed severe opiate and benzodiazepine withdrawal syndromes and was given only clonidine and ibuprofen for treatment.

He was then transferred to a holding cell at the Federal Courthouse in Seattle where I was meeting him at the request of his lawyer Douglas Hiatt who, knowing my interests in cannabinoid medicine and social justice, had contacted me the previous day seeking my help in assessing Mr. Tuck’s overall health status and facilitating his transfer to emergency medical services, if appropriate. As I interviewed Mr. Tuck through the screen, I observed that he was in a state of considerable physical distress and pain. He told me that he had had a Foley catheter in place for several days and that he felt a burning sensation when he attempted urination. He also told me that he was suffering from significant prostate-related pain and that he was having significant difficulty with defection because of the prostatic pain and the subsequent burning sensation it caused in his urinary tract. He asked me if I thought that he would permanently “damage” himself if he were to continue having bowel movements with all the attendant pain and agony they caused him. I told him that he may be suffering from prostatists and urethritis, and that he may do himself significant harm by resisting the urge to defecate for a prolonged period. Mr. Tuck told me that he was very concerned about becoming “cripple” and that he did not want his wife to have to be burdened with taking care of him should he become no longer independent. Mr. Tuck feared that he may die in custody, and he expressed emotional and spiritual sentiments that he was thankful to have been able to help so many sick people with his cannabis-based medical dispensary in California. In his agony and fear that he may become severely disabled or possibly die, Mr. Tuck was comforted by the fact that he had been able to help advance “the movement”. Mr. Tuck was in tears.

I saw Mr. Tuck again at a hearing in the Federal Magistrate’s Courtroom later in the day. I observed his slow and deliberate gait as he shuffled into the courtroom. One leg was significantly more rigid than the other. His facial grimacing was consistent with expressions of extreme pain and discomfort. The Magistrate scheduled a hearing for the following day. After the hearing, I spoke briefly with two individuals who work for Pre-Trial services and the Assistant US Attorney who was involved in the hearing, and I relayed to them the dismal condition that I had observed Mr. Tuck to be in and my belief that he desperately needed medical attention.

The next day, I returned to the Courtroom for Mr. Tuck’s hearing. Mr. Tuck again appeared to be in significant pain and discomfort. During the course of this hearing, the Magistrate asked me to address the Court briefly. I stated my name and home address and my affiliation as President of the Washington Physicians for Social Responsibility. I told the Court that I would be able to serve as a liaison to Seattle’s hospital system for Mr. Tuck. I committed to seeing to it that he would receive his needed medical care. The Magistrate bonded myself and Mr. Hiatt to the court, and Mr. Tuck was released into our custody with the understanding that he would receive medical care and then report to the jurisdiction where he faced charges in California. Due to AP media presence, news of Mr. Tuck’s medical condition and his conditional release appeared in 50-100 newspapers across the country. Although the federal magistrate released Mr. Tuck into our custody that day, he was forced to spend an additional night and day in the King County Jail due to, as I understand it, an outstanding warrant that directly connected to the original legal problems that forced Mr. Tuck to flee to Canada in 2001. Mr. Hiatt, after nearly around-the-clock negotiations with jail officials and Humboldt County officials, was able to secure Mr. Tuck’s release from the jail.

I spoke with the physicians and medical students working at the ED and briefed them about Mr. Tuck’s condition. In the ED, Mr. Tuck was found to be suffering from chronic back and leg pain, prostatitis, urinary tract infection, fever, and folliculitis. His pain was managed, and he was given a prescription for two types of antibiotics and discharged that evening with recommendation to follow-up with various specialists. He stayed with Mr. Hiatt that night. The next day, I arranged for Mr. Tuck to see Dr. Gregory Carter, a physical medicine and rehabilitation and pain specialist, in Olympia, WA. Though Mr. Tuck said he was already feeling much better due to the fact that his pain was being treated again, en route to the hospital Mr. Tuck experienced extreme dizziness and nausea which he said was related to his resumption of morphine-based analgesia after withdrawal. At the hospital in Olympia, Dr. Carter conducted a complete history and physical examination with Mr. Tuck. He prescribed several medications which I later helped Mr. Tuck to fill at a Seattle pharmacy and authorized his medical cannabis use which he qualified for under Washington State law (Tuck was already carrying medical cannabis authorizations from California, Oregon, and British Columbia). Mr. Tuck took his medicine as prescribed and his condition seemed much improved. After staying with me for a few more days pending the securing of a location for Mr. Tuck to stay in California, I escorted Mr. Tuck back into the custody of Mr. Hiatt. He later appeared in Federal Court in California where he was asked to pay a fine to settle the charges. Later, he would tell me that when he walked into the Federal Courthouse in San Francisco, he experienced an extreme state of terror, a part of which he says will always stay with him.

For many years, I held onto the crutches that he left at my apartment as well as the discarded prescription bottle with antibiotics he was prescribed in the emergency room so that I could remember that this unreal and horrendous incident truly did happen.

If there is interest, in future post, I can describe another case of a hospitalized patient with end-stage liver disease who was denied the opportunity for a life-saving transplant after the transplant board deemed him an unfit recipient due to concerns surrounding his palliative use of medical marijuana, which had been lawfully authorized by his own family doctor from the same institution, leaving him to be discharged from the hospital to hospice where he ultimately died.

CTMMP Pre-rolls… They leave a bit to be desired.