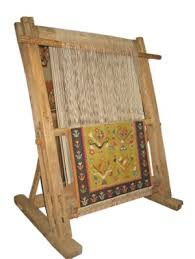 Like most women in Afghanistan’s Qalizal District, Bebehaja’s life is told on the strings of a carpet loom. It’s a vocational inheritance of women of Turkmen heritage, who begin as early as seven and may not stop until they’re 70. It’s as linear and taut as the cords on which they weave, unspooling balls of yarn over minutes, hours, days, decades creating masterful motifs, while simultaneously emptying themselves of the same beauty and comfort they put into the things that they create.

Bebehaja is 60 now. She’s covered in a stained, blue burqua so I can’t see her face, but I hear the weariness in her voice. She tells me the dirty secret that everyone knows: the most important material in carpet making in Qalizal is not wool, but hashish.

“When we don’t eat the hashish we’re like a dead body,” she says. “When we eat it we can work hard and work more.”

Women like Bebehaja use hashish routinely three times as day. They smoke and eat it at breakfast, lunch, and dinner. It’s so ubiquitous in the region that women can secretly buy it from shopkeepers along with the day’s groceries or other household supplies.

The hashish, which is processed resin from the flowers of the cannabis plant, has reportedly been in use for medical and recreation use since 3000 BC. It has the same active ingredient as marijuana, which is THC or tetrahydrocannabinol. The effects can include relaxation, pain relief, and overall sense of well being.

But in Qalizal, hashish’s sedating effect has led to a heinous practice, which virtually ensures the enslavement of a next generation of carpet weavers. In order to spend long hours at the loom, women here routinely feed their young children hashish as well.

“The reason we’re giving it to kids is we need them to be quiet, so we can work,” says Bebehaja.

Many years earlier her own mother did the same to her. Afghan narcotics officials say the practice has been going for more than 100 years and it shows no signs of stopping. An estimated 30,000 people in Kunduz Province are chronic hashish users, and more than half of them are from Qalizal.

Poverty drives both the carpet and drug business. Husbands tend to be farmers working long hours in the fields and the only income opportunity for women, who are usually not able to work anywhere but from their homes, is carpet making. But who takes care of the children while they’re at the loom? A babysitter called hashish.

Another woman from the area, Gohar says she gave all four of her children hashish during the early parts of their life. Weaning them off as they got older was a nightmare for the children, and the process that left them in more fragile health.

“When they begin to walk I stop giving them the hashish,” says Gohar.

At the moment, the child in her arms, two-year-old Zarifullah, begins to cry. It’s nearly lunchtime, but Gohar tells us this is the time she gives the girl her second bb-sized pellet of hashish. Without it, she’s restless, cries, and is irritable—the same thing that happens to adults going through hashish withdrawal.

I’ve met both of these women at the house of Malika Gharebyra, Director of Women’s Affairs in Qalizal District. Since there’s no money for treatment programs or even education, her attempt at outreach is bringing addicted women here to share their stories with the media. While this helps to reach an audience on the outside, it does little to help with the problem in Afghanistan. She tells us the story of a family of nine who are all chronic users, including the children. In order to make money to buy more drugs the father tried to sell his eight year-old daughter off for marriage.

The cycle is unrelenting for most of the women here. Their drug habits cost around 200 Afghanis or $4 dollars a day, which is usually more than they earn weaving carpets.

There’s not much help coming on a national level either. The chief of the Counternarcotics Department in Kunduz Province, Abdul Bashir Morshid, says he’s looking for NGO’s and outside donors to help fund treatment programs in the Qalizal. Currently there is only one treatment clinic in the whole province with just 20 beds and 30,000 potential patients. But he’s most worried about the children.

“I’d like to create a babysitting program where we can separate the children from their mothers during the day to allow them to work,” says Morshid. “That’s a start. But it’s possible this problem has been going on for ten generations.”

And it’s also impossible to tell how many generations have already been lost to the problem. Bebehaja provides at least some anecdotal evidence of that. She tells us that she gave birth to nine children, but not one of them is alive today.

“I was eating a lot of hashish at the time and giving it to them,” she says. “They all died after one month or so. None of my children lived more than few months.”

While it’s uncertain if hashish killed them all, medical research shows that marijuana use during pregnancy can lead to a greater likelihood of SIDS or Sudden Infant Death Syndrome. The debilitating effects of THC on the respiratory systems of newborns from even a little hashish is also a key suspect.

“I’m really sad that I lost my children. When I think about it, it makes me feel worse and I eat more hashish. I’m addicted,” says Bejehaja.

She wishes she would’ve done things differently. Sometimes she says she visits the graves of her children. But her time with them was short and there are not many memories. The ones she does have become hazy, as indistinguishable as both the hours of her days and the strings of her loom.

All text and photos by Kevin Sites.

Kevin Sites is a rare breed of journalist who thrives in the throes of war. As Yahoo! News’s first war correspondent between 2005 and 2006, he gained notoriety for covering every major conflict across the globe in one year’s time and fostering a technology-driven, one-man-band approach to reporting that helped usher in the “backpack movement.” Kevin is currently traveling through Afghanistan covering the tumultous country during “fighting season” as international forces like the US pullout. Keep coming back to VICE.com for more dispatches from Kevin.