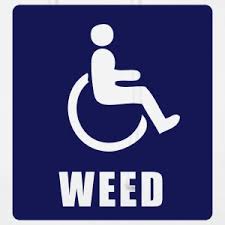 Kile, 52, drives his motorized wheelchair Friday in Maryland as he rides to Washington, D.C., hoping to tell President Barack Obama about the concerns of those using medical marijuana. / Curtis Kile Jr.

Afflicted with cerebral palsy, 52-year-old Curtis Kile is rolling his wheelchair on a marijuana mission to the White House.

Since June 14 when he left home in Taylor, Kile has aimed his motorized chair down bumpy sidewalks and along road shoulders buzzing with traffic, across mountains and through cities and small towns, on a zigzag path from Michigan to Washington.

His goal is to tell President Barack Obama, face-to-face, that marijuana should be legalized nationwide. That would let sick people have safer, cheaper access to the drug that he feels has been vital to his health.

“The alcohol industry doesn’t want it legal, and the pharmaceutical and the tobacco companies don’t want that, because it’s going to bite into their profits.

“It’s the money that’s stopping it, and that’s wrong,” he said.

Kile plans to roll to the White House gates on the Fourth of July. But that’s just after the first family is to return from a tour of Africa, and on a day that Obama is to host a backyard birthday party for his older daughter, Malia, according to some reports.

Whether the roving Michigander gets to speak to the president, or anyone of significance, is a long shot. Obama did not reply to letters sent from Taylor months ago, Kile said. A White House press aide said only that Obama’s holiday schedule has nothing about visitors from Michigan.

“I know,” Kile said. Still, he brimmed with hope Saturday when reached by phone in Hagerstown, Md., after his fortnight of lurching along sidewalks and talking to anyone who listens.

“The younger ones, they just give us a thumbs up. But the older ones come over and say they agree with me. And ‘be safe on your journey,’ a lot of them say.”

Even if Kile’s holiday welcome is an empty street in front of 1600 Pennsylvania Avenue, his allies in Michigan said he is making a dent in the yielding wall against legalizing the drug.

“His story has inspired people all across the country,” said Rick Thompson, Flint-based editor of the Compassion Chronicles, an online news source for the cannabis community in Michigan. Thompson wrote about Kile last week.

“I don’t know that he’ll get to speak to the president, but there’s no denying his passion,” added Southfield attorney Michael Komorn, host of Planet Green Trees, a weekly Internet interview show about marijuana.

For years, marijuana has controlled the severe muscle spasms and other symptoms of Kile’s condition, he said. His voice cracked when he spoke by phone last week about his wish for sick Americans to have low-cost, legal access to the drug.

His on-site support crew consists of his son Curtis Kile Jr., 17, headed for Eastern Michigan University this fall. Curtis Jr. pilots their 2006 Ford Econoline van, with 417,000 miles on the odometer, while dad inches along by wheelchair nearby.

The teen usually sleeps outdoors in a small tent and throws a tarp over his father, who sleeps sitting up in his wheelchair, after suppers of hot dogs and lunches of peanut butter sandwiches, they said. On Sunday, they planned to leave Hagerstown, after spending their dwindling cash on a motel room.

Back at the home they share in Taylor, Kile’s daughter MaryAnn Kile, 23, a Wayne State University nursing student, forwards donations to the duo from people who have heard of her father’s mission.

“They really don’t have much money left. As soon as someone donates, I call them and say, ‘Hey, I just got 50 bucks.’ ” she said.

Cannabis in your coffee?