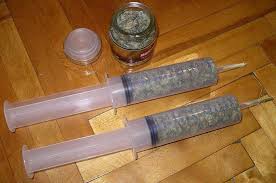 For more on renegade doctors, check out my editorial in this month’s issue of Releaf. -UA

As a member of the Amendment 64 task force who is deeply troubled by the possible repercussions of legalizing marijuana, as well as a central figure in the national anti-pot organization Project SAM, Dr. Christian Thurstone is controversial in the marijuana community. But he hasn’t backed away from warning about the dangers of weed, particularly for adolescent users.

His latest assertion? Users may soon start directly injecting THC, the active ingredient in cannabis, rather than smoking or ingesting marijuana.

“It seems like people are doing more and more to get a deeper high and presenting to us more and more addiction to marijuana,” says Thurstone, whose main gig is as medical director of a Denver Health program called Substance Abuse Treatment, Education and Prevention (STEP). “I worry that might be a next step toward the injection of THC.”

Thurstone shares this concern in “Higher and Higher, the latest blog on his personal website, DrThurstone.com. The offering revolves around elevated levels of THC found in urinalysis tests conducted on his patients, most of whom range in age from thirteen to nineteen.

The seeds of the study were planted long ago. According to Thurstone, “I started thinking about this in 2004, when Dr. Wilson Compton published an article in the Journal of the American Medical Association showing that the prevalence of marijuana use in the U.S. was staying the same, but the prevalence of cannabis use disorders — marijuana addiction — was going up significantly.”

The phrase “marijuana addiction” is guaranteed to raise the hackles of many cannabis activists, who insist that the substance is not addictive. Thurstone disagrees.

“I don’t think in the mainstream scientific world of addiction that there’s debate any more that it’s addictive,” he maintains. “It works on the same part of the brain as all other addictive substances, and there’s an animal model of marijuana addiction now. We know that it’s not just psychologically addictive but physically addictive, and studies by Dr. Alan Budney at Dartmouth have characterized a physical addiction to marijuana. Marijuana withdrawal is clinically equivalent to tobacco withdrawal — and anecdotally, in our experience, we see adolescents coming into treatment extremely addicted to marijuana. They’re dropping out of life, giving up on school and families to pursue their marijuana addiction.”

“We know that there’s been an increase from about 2 percent THC a couple of decades ago to more like 10 percent now,” he continues. “And in Colorado, it’s probably even higher than that.”

Continue for more of our interview with Dr. Christian Thurstone about more potent marijuana and the prospect of injecting THC.

For Thurstone’s patients at Denver Health, 95 percent of whom are referred for issues concerning marijuana, “we felt the urinalysis ratio had been increasing, too. So we looked at our data as far back as we could — 2007 — and analyzed it over time. And we noticed a significant increase in the urinalysis ratios when we analyzed that data pre- and post-2009 and 2010, which is when we had the big commercialization of marijuana.”

This period involved the growth of the medical marijuana industry, and while only a handful of patients under the age of eighteen have received red cards allowing them to legally use the substance, Thurstone maintains that plenty of them have been doing so anyhow. “That’s right about when our kids started using medical marijuana,” he says. “And that’s when we saw a big jump in the THC ratio” — from an average of 358 nanograms per milliliter of urine to 536 nanograms.

Here’s a graphic depicting the difference.

Because of what he says is “widespread diversion of medical marijuana to teens,” the patients coming to him “have more severe marijuana dependence and more symptoms than teens not using medical marijuana. And it’s also consistent with the whole idea that kids are using higher potency marijuana that’s probably more addictive. Anecdotally, we’re hearing about patients who start with cheap, low-grade marijuana before moving on to more potent marijuana, and then other ways of consuming it: waxing marijuana, dabbing marijuana and chasing a bigger and bigger high.”

Such actions echo the behavior of those using other drugs, Thurstone allows. “People who start with pills may graduate to snorting or smoking heroin — and then to heroin injection. It’s just a way to get a more intense high, because anything that’s injected tends to reach the brain pretty quickly.”

That’s why Thurstone concludes his “Higher and Higher” article with the following line: “It is reasonable now to question how much longer it will be before we see injection use of THC — especially as marijuana is legalized.”

Thus far, however, Thurstone admits that none of his patients have taken this step.

Continue for more of our interview with Dr. Christian Thurstone about more potent marijuana and the prospect of injecting THC.

By floating such possibilities, Thurstone has won the enmity of marijuana advocates like Russ Belville, aka Radical Russ, a talk-show host and media director for the National Cannabis Coalition. In an online response to “Higher and Higher,” Belville accuses Thurstone of being a scaremonger and a profiteer. An excerpt from his take:

All you’re finding is that the people forced into your business for violating prohibition are getting higher, not that getting higher forces people into your business. You know as well as I do…that for every one person who self-admits to rehab solely for marijuana, another four are forced there by the criminal justice system. Colorado went and added language to the constitution that is really bad for your bottom line.

To that, Thurstone says, “I work with adolescents and young adults, so for pretty much 99 percent of my patients, marijuana is sill illegal. Amendment 64 didn’t really change anything in terms of their legal status.”

Additionally, he says, “fewer than half of our referrals are court-referred. The majority are not. They come in voluntarily because of their addictions. And we’ve done a fair amount of research in which we’ve been able to offer free treatment to teenagers with substance-abuse problems. And when we offer it free, we’ve had no problems getting kids to come to treatment.

“The whole juvenile-justice-referral thing has a lot to do with the artifact of nobody wanting to pay for treatment. We wait for teenagers to fall into the hole of juvenile justice before we’re willing to pay for their treatment. If we had good payment and reimbursement — third-party payers for substance treatment — more people would go on their own.”

In the meantime, Thurstone says the number of clients he’s seeing began growing substantially even before the passage of Amendment 64. “We’ve doubled our case load since September of 2012,” he reveals, “and we’re in the process of hiring another therapist to meet the demand.”

Whatever the case, he says the flood of patients means he and his staff are “all-hands-on-deck to try to meet the demand.” And if people start injecting THC, he figures to be busier than ever.