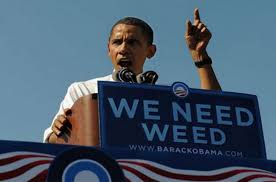 Obama Says No To Legalizing Marijuana

In a speech in Mexico City on Friday, President Obama shut the door on any possibility that he’ll support efforts in his second term to legalize certain recreational drugs.
“I’ve been asked, and I honestly do not believe that legalizing drugs is the answer,” the president told a large gathering of young Mexicans at the city’s Anthropology Museum.

Polls show that more and more Americans favor ending the federal ban on pot. A handful of states in the U.S. have lifted legal restrictions on the drug in recent years — including Colorado and Washington — putting Obama in an awkward place. A pot smoker in his younger days, he must decide whether to instruct his Department of Justice to challenge those state laws, or to simply let them be.

The president likely felt it necessary to touch on drugs in his speech today since marijuana is a chief import from Mexico to the United States. It is also largely to blame for the rising swell of cartel violence that has killed thousands in Mexico over the years, and has occasionally spilled over into the southern U.S.

Obama said that his administration must focus on an all-encompassing strategy to deal with drug users at home, as well as figure out a way to reduce demand for drugs.

“We understand that much of the root cause of violence that’s been happening here in Mexico, for which many so Mexicans have suffered, is the demand for illegal drugs in the United States. And so we’ve got to continue to make progress on that front.”

He added that fixing the problem will require “a comprehensive approach — not just law enforcement, but education and prevention and treatment.”

Those words reflect the latest plan put forth by Obama’s Office of National Drug Control Policy, which essentially considers recreational drug use to be a public health issue. Rather than advocating for reforming drug users through jails and prisons, the plan calls for blending strong prevention techniques with effective rehabilitation programs in order to curb future drug use.

The Obama administration’s strategy, though, is somewhat controversial since it technically defines regular pot users as people with brain diseases — addiction, the administration says, is a brain disease. Scores of marijuana defenders, however, say that there is no proof that the drug is addictive.