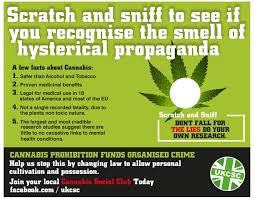 Police in England are distributing “scratch and sniff” cards to help members of the public detect the telltale aroma of illicit cannabis farms.

The cards, which replicate the distinct smell of growing marijuana, will be mailed to homes in 13 areas throughout the country, in the hope that they will help people to identify cannabis factories in their communities.

“Many people don’t realize that the empty, run down house or flat on their street with people coming and going late at night may actually be a commercial cannabis farm. It’s not just the stereotype of the remote rural set or disused industrial estate unit,” said Andy Bliss, of the Association of Chief Police Officers, in a press release by Crimestoppers, the independent charitable organization which launched the campaign.

Crimestoppers offers a list of clues for spotting cannabis cultivation, including a “strong and sickly sweet smell; visitors at unsociable hours; strong and constant lighting day and night and lots of cables.”

The U.K. saw a 15% growth in cannabis production in 2011-12, according to Crimestoppers, which the group claimed has led to an increase in theft, violence and the use of firearms, as well as an increased risk of fire in residential areas where growers have tampered with electrical supplies. Supplying cannabis in the U.K. can lead to a 14-year prison sentence.

The Daily Mail notes that a scratch and sniff card scheme has been used in the Netherlands, where bulk cultivation of the plant remains illegal (although personal consumption is widely tolerated). A mail-out of more than 30,000 cards reportedly helped Dutch authorities track down hundreds of cannabis farms.

And although the cards smell of pot, Crimestoppers warns, don’t try to use them to get high. “There is absolutely no trace of Tetrahydrocannabinol or THC, the principal psychoactive element of the cannabis plant, on the scratch and sniff cards,” the group said.