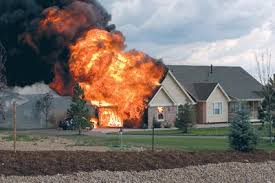 How Hash Oil Is Blowing Up Across the U.S. — Literally

Don’t take this the wrong way, but, just because you like it, doesn’t make you smart enough to make it. -UA

Last week, FEMA posted a rather unexpected alert in its emergency services bulletin titled “Hash Oil Explosions Increasing Across US.” Alongside more quotidian warnings of cyber terrorism and industrial vapor clouds, it described an uptick in explosions at apartments and hotel rooms involving “a process using butane to extract and concentrate compounds from marijuana,” destructive incidents that FEMA warned could even be mistaken for pipe bomb or meth lab explosions.

Wait, marijuana-based explosions? When did cannabis products start sounding like something out of Breaking Bad?

A clear, golden brown cannabis derivative also known as honey oil, shatter, wax and (disgustingly) “earwax,” butane hash oil (BHO) has some distinct advantages over traditional marijuana: It has very little smell, either in its solid form or when vaporized, is very portable, and can achieve intense effects with small amounts. (That’s because BHO is also highly concentrated; according to one Oregon-based hash oil producer — a Cannabis Cup award winner who goes by “Ganja Jon” — a pound of marijuana typically generates 1/10 to 1/5 of a pound of hash oil.)

“BHO has been gaining in popularity in the past three years,” High Times senior editor Bobby Black told Wired. “It’s been done for decades, but it was only done by a few people and it was very underground. Even at High Times we didn’t really talk about it or cover it because it was so rare.” No longer. At the High Times series of Cannabis Cup competitions, which take place in states where medical marijuana is legal (and Amsterdam), Black says the once-marginal hash oil entries have not only increased over the last several years but “pretty much eclipsed traditional hash at this point.”

But as its popularity grows, so do the number of hash oil enthusiasts eager to attempt their own homebrew BHO, a process that usually involves the highly flammable solvent butane. The result in a number of cases, as the FEMA bulletin notes, has been “fires and explosions [that] have blown out windows, walls, and caused numerous burn injuries.”

Local media reports often describe hash oil explosions as the result of “cooking hash” or “cooking hash oil,” but that isn’t strictly accurate. There are no Breaking Bad Bunsen burners or chemistry sets involved, and the process of producing hash oil is a relatively simple one, albeit one that ill-informed stoners can still manage to screw up.

Hash oil is typically produced by filling a cylindrical glass or stainless steel canister with pot (Bed Bath and Beyond’s metal turkey basters are a popular choice), and flooding the canister with a solvent — usually butane — that strips the plant matter of its cannabinoid-containing oils. The resulting mixture of psychotropic plant oil and chemicals is then purified to remove traces of the solvent. One common method of butane removal includes boiling it off in a hot water bath, while another involves the use of a vacuum pump and vacuum chamber to lower butane’s boiling point, pulling butane from the oil.

What makes it dangerous is not so much the extraction process itself, but rather the problem of improper butane ventilation. Butane is highly flammable and it tends to sink, meaning that if you use it indoors or don’t ventilate well, you’ll run into serious trouble. Let some butane puddle in your living room, throw in a thoughtless spark from a cigarette, stove, or — dare I suggest — bong hit, and suddenly your apartment is missing a wall.

That’s allegedly what happened in January, when three people were injured after a hash oil extraction gone wrong blew through the walls of a San Diego hotel. A few months earlier, an Oregon man suffered burns in a similar explosion that blew out the windows in his apartment and sent him to the hospital. Although it’s perfectly possible to make hash oil safely, such explosions are the result of a relatively small number of hash oil producers who fail to take even the most basic precautions. (The number one precaution according to everyone I spoke to for this article: Never make oil indoors.)

“We are as concerned as anyone about the dangers involved in making it,” said Black, who also cited safety issues that go beyond explosions to the quality of the product itself. If you’re purchasing hash oil from a source besides a reputable dispensary, for example, you may not know whether it contains high levels of butane, or if it was created using poor materials — like PVC pipe instead of stainless steel — that can leech chemicals into the product. “It’s really a kind of bathtub gin situation,” says the High Times editor.

It’s not easy to regulate the safety of an industry whose legal status varies from state to state, particularly regarding concentrates like BHO that often land in a regulatory gray area even in places where recreational or medical marijuana is legal. And as interest grows in both consuming and making hash oil,  so too do the number of YouTube tutorials and forum threads that spread misinformation and fail to emphasize proper safety – an explosive combination that suggests we’ll be seeing more attempts at DIY hash oil that end with a very dangerous bang.