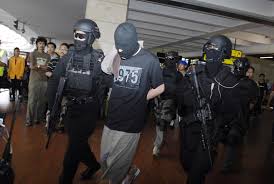 Briton arrested in Indonesia over drugs

JAKARTA – A Briton arrested for marijuana possession in Indonesia’s capital Jakarta could face up to 12 years in prison if convicted, a police spokesman said Tuesday.

Kirk Elliott Neville, 36, who worked as an English teacher in eastern Jakarta, was detained on Saturday with a one-gram (0.035 ounce) package and two joints of marijuana, the East Jakarta police spokesman Didik Haryadi told AFP.

“Based on a tip-off from locals, we arrested him on Saturday evening when he was smoking a marijuana joint at his house,” he said, adding that under the anti-narcotics law, Neville could face between four to 12 years’ jail.

The British embassy confirmed his arrest and said it had offered consular assistance.

A British grandmother was sentenced to death last month for trafficking drugs into the resort island of Bali.

Two members of an Australian drug smuggling gang known as the “Bali Nine” who were arrested in 2005 are on death row, while seven others face lengthy jail terms.

Another Australian, Schapelle Corby, who was sentenced to 20 years in prison for smuggling 4.1 kilograms of marijuana in 2005, recently had her term slashed by five years after a clemency appeal to President Susilo Bambang Yudhoyono.