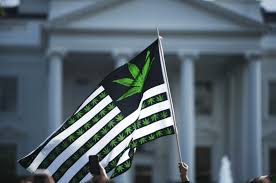 Advocates for the legalization of marijuana plan to step up their political giving and lobbying efforts now that members of Congress are taking an interest in changing federal drug laws.

The lobbyists say lawmakers who wouldn’t give them the time of day are suddenly interested in meeting with them and introducing legislation following the approval of ballot initiatives in Colorado and Washington that legalized recreational use of the drug.

“These were folks who wouldn’t take a call five years ago and now they are calling us and telling us to get up there with our PAC money and our expertise,” said Allen St. Pierre, executive director for the National Organization for the Reform of Marijuana Laws (NORML). “For those of us who have been at this for the past 20 years, it has been nice to see the warm turn.”

“Our hope is to exceed what we have done in any previous cycle,” Fox said.

The group is aiming to get more than $150,000 in contributions to its PAC for the 2014 election cycle — topping its previous record of more than $119,000 in donations for the 2006 campaign, according to Federal Election Commission (FEC) records.

Further, the PAC is changing its name to the Marijuana Policy Project PAC, dropping a prior reference to medical marijuana. Fox, who also lobbies for the National Cannabis Industry Association, said the name change signals that a broader reform agenda is now on the table.

“The ground has shifted and we now see members of Congress wanting to regulate marijuana like alcohol. The name change reflects that our activity on the federal level is no longer just about medical marijuana,” Fox said.

But strategists looking to reform drug policies are choosing their battles carefully at the state level.

In a Nov. 28, 2012, memo obtained by The Hill, Rob Kampia, MPP’s executive director, said Oregon should wait until 2016 to for a marijuana legalization ballot drive, when another presidential election would boost turnout among young voters.

“Given that an initiative in November 2014 would be almost certain to lose, MPP would contribute no money toward a signature drive, paid staff, or advertising during the 2013-2014 cycle,” Kampia wrote to Oregon activists.

Kampia said MPP is interested in passing an Oregon ballot initiative in 2016 and would contribute $700,000 to the effort.

“There is going to be disagreement at times. That’s par for the course. It’s like any other issue advocacy group. We will agree on the objectives but we might disagree on how to get there,” said Roy Kaufmann, one of the activists who received the memo and is now MPP’s Oregon representative and agrees with waiting until 2016.

Kaufmann was the campaign strategist for Measure 80 in Oregon, the marijuana legalization ballot effort that failed in 2012.

“We can’t tell our funders in good faith that they should fund a 2014 initiative. We are not saying it’s impossible to win. We are just saying it’s a completely unnecessary risk,” Fox said. “The only thing that can keep Oregon from winning this in 2016 is a loss in 2014.”

As the movement for marijuana legalization spreads, competition for fundraising dollars is likely to grow. A number of well-heeled donors have already opened their wallets for the cause.

New Approach Washington, the main group that campaigned for legalization in that state, took in more than $6 million in contributions last election cycle.

Lobbyists say the battle that is brewing over drug laws will be far-reaching and not confined to recreational use of marijuana.

“You going to see reform on federal drug policy in general,” said Bill Piper, director of national affairs for the Drug Policy Alliance. “It’s not just about marijuana. It’s about racial disparity, over-incarceration and saving money as well.”

Reps. Jared Polis (D-Colo.) and Earl Blumenauer (D-Ore.) each introduced separate bills this past week that would regulate and tax marijuana like alcohol. The two lawmakers also released a report on how to rethink federal marijuana policy.

On the other side of the Capitol, Sen. Patrick Leahy (D-Vt.), chairman of the Senate Judiciary Committee, plans to hold a hearing on marijuana policy this Congress.

Drug laws are also getting a second look from the GOP, with Kentucky Republicans rallying behind industrial hemp. Rep. Thomas Massie (R-Ky.) introduced legislation this past week to exclude hemp from the Controlled Substances Act’s definition of marijuana.

Senate Minority Leader Mitch McConnell (R-Ky.) has backed that effort, saying he became convinced that hemp production would be good for his state after long discussions with the libertarian Sen. Rand Paul (R-Ky.).

Lobbyists don’t expect a marijuana legalization bill will be on President Obama’s desk this Congress, but lawmakers know they will have to reconcile federal policy at some point with the legalization movement sweeping the states.

“I often tell elected officials that if you are going to remain relevant in politics, you are going to have to move towards drug policy reform because that’s where the younger voters are,” Piper said.

One Democrat said he’s made a personal appeal to Obama — who has admitted to smoking marijuana as a teenager — for changes to federal policy.

“I raised the issue myself with the president at the Democratic retreat [on Thursday]. … It should change,” Rep. Steve Cohen (D-Tenn.), noting thousands of people are in jail for marijuana use.

Cohen plans to introduce legislation to create a commission to study states where medical marijuana and marijuana have been legalized. Advocates believe the bill could attract White House support.

“The commission gives the president some maneuvering room by affording him time and his administration acknowledges that public attitudes about this have changed,” St. Pierre said.