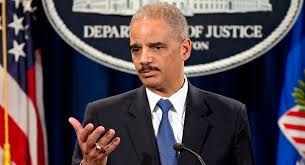 Inslee and state Attorney General Bob Ferguson met with Holder because of the conflict between federal law, which bans all marijuana, and the state’s law, which makes possession of an ounce of pot legal for those 21 and older.

Inslee said the 45-minute conversation was “very satisfying” and a “confidence-builder” about the state’s ability to move forward implementing legal marijuana. “We went in thinking we should continue with rule-making and nothing I heard should dissuade us,” Inslee said.

At the same time, he stressed that Holder said nothing about the federal government’s intentions and whether it would crack down on Washington state or look the other way.

Inslee said he did not press Holder for a clearer signal, or position, because he considered their talk a preliminary meeting, with more discussions to follow.

Noting that the state is moving ahead with rule-making, Ferguson said he emphasized that the state would like answers soon. “We made it very clear that while we’re moving forward, some deadlines are coming up soon. I think Attorney General Holder understood that we’d need guidance in months to come,” Ferguson said.

Inslee said several times the state would provide Holder with details about how it would prevent its legal marijuana from leaking into other states.

“We spent some time talking about how the initiative would work, how the regulatory process would work. He listened with great interest, and I appreciated that,” Inslee said.

The law will be implemented by the state’s Liquor Control Board, which on Tuesday held the first of six meetings planned to take public comment about the law. The second meeting will be at 7 p.m. Thursday at Seattle City Hall.

The governor added that Holder’s questions show he is “going to be fully attentive” to Washington’s evolving law. Inslee said it’s no surprise that Holder would take his time to fully evaluate the implementation of I-502.

In case the federal government decides to oppose the law, Ferguson has a team of lawyers in his office preparing to make the best legal case for upholding I-502.

“I said we want to avoid a legal fight,” Ferguson recounted during a news conference after the meeting with Holder. “We want to find a pathway forward. But if it comes to it, the Washington Attorney General’s Office will be prepared for a legal fight.”

President Obama has said recreational pot smoking in Colorado and Washington, the two states that have legalized it, is not a major concern for his administration.

“We’ve got bigger fish to fry,” Obama said in an interview with ABC News last month. “It would not make sense for us to see a top priority as going after recreational users in states that have determined that it’s legal.”

Meanwhile, the U.S. Court of Appeals for the Washington, D.C., circuit ruled Tuesday that medical marijuana should not be reclassified from its status as a federal Schedule I dangerous drug with no medical value.

In a 2-1 decision, the appeals court agreed with the government’s contention that adequate and well-controlled studies on marijuana’s medical qualities do not exist.

Advocates disagree and vowed to appeal the decision to the U.S. Supreme Court