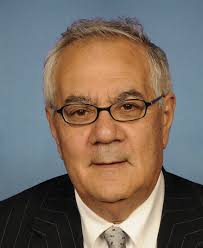 Barney Frank To Marijuana Activists – ‘We Must Press Our Advantage’

Unsolicited — in front of the 60 or 70 activists and opinion leaders in attendance — Rep. Conyers made an off-handed criticism of the drug war, which was nice to hear.

And Rep. Frank spent most of his time at the microphone talking about the marriage-equality victories on November 6 in four states, saying a few times that the gay-rights community “must press our advantage.”

In other words, if the political momentum is on your side, you should use that momentum.

After their remarks, I chatted with Rep. Frank one-on-one.  (This would surely be the last time I speak to him before he retires from the U.S. House in January.)  After congratulating me on our wins in Colorado and Washington on November 6, he said to me, “We must press our advantage.”

In fact, that’s what we’re going to do with a new slate of ballot initiatives for November 2016, as well as congressional legislation to allow states to determine their own marijuana policies without federal interference.

I want to thank Congressmen Barney Frank and Ron Paul (R-TX) for their service in the U.S. House; both men are retiring on the same day, as it turns out.  They’ve made a wonderful contribution to the marijuana-policy-reform movement through their legislative leadership over the last three decades.