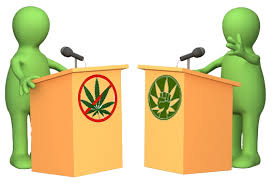 Colorado voters last month approved Amendment 64 legalizing recreational marijuana and the possession and distribution of up to 1 ounce or six plants for people 21 and older. But many facets of marijuana’s transition from taboo to commercial remain to be reconciled by state lawmakers and regulators, ranging from its taxation to its growth and distribution.

“The rules are so wide open, I don’t think we even know which way is up right now,” said Larimer County Commissioner Lew Gaiter.

Douglas County did not wait for the state to answer questions about the implementation of Amendment 64. Commissioners there have banned commercial marijuana businesses, and proposed bans are progressing in Weld and El Paso counties.

Larimer County commissioners said they are less inclined to take such a hard line, but they are willing to entertain slow-walking the establishment of marijuana enterprises until all of the state guidelines governing them are in place.

“The only thing that I might consider at this stage of the game is a temporary moratorium, not so that we can say, ‘No way, not in Larimer County,’ but so we can get our arms around the situation,” Gaiter said.

“That might be a wise thing until we have a level playing field and some certainty for people,” Commissioner Steve Johnson said.

All three Larimer County commissioners expressed their personal opposition to Amendment 64 before the election, but they now say that they accept the outcome and will honor it.

“Our job is to carry out the wishes of the voters in the best way for Larimer County,” Johnson said. “To ban the sale completely of something that according to state law people can legally possess and use is going to force them to obtain it illegally in the county, and that is not a good situation.”

Gaiter neither opposes marijuana businesses altogether nor supports a wide-open approach to them.

“There’s a lot of gray area around this that we need to define, but for me to say a hard, ‘No, no way, no matter what,’ I’m not there — or a hard yes under any circumstances, I’m not there either,” he said.

As they had with the proliferation of medical marijuana dispensaries, the commissioners will mull whether less-populated, rural portions of the county are suitable for marijuana business, or whether it makes better sense to shepherd them toward pockets of population, where resources such as utilities and law enforcement already are established.

“Really the only issue with the county probably is the land use issue,” said Commissioner Tom Donnelly. “The questions we’ll be dealing with will be whether we have adequate infrastructure to host large-scale commercial operations. That’s probably where our discussion will head. That’s probably a little more boring and a little less controversial than the details they’ll be working out in Denver.”

Nonetheless, everyone on the board expects that the spectrum of interests that collide at the intersection of legal marijuana and government will generate a lively discussion.