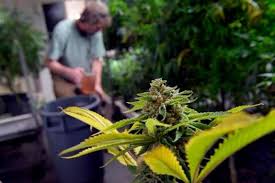 Liberia Struggles to Crack Down on Marijuana Farmers

Nathaniel Cico has been growing marijuana at his central Liberia farm since last year.

“I grow marijuana. It is what I have been doing over the past year to sustain my family and myself,” he explained. “There are no jobs in the country. Things are very tough. How do people expect us to survive if things are very tough, [if there are] no jobs?”

The U.N. Office on Drugs and Crime says marijuana is the world’s most widely used illegal drug. The UNODC says many African countries, like Liberia, have ideal growing climates for marijuana. As a crop, marijuana allows farmers to make a nice profit with very little upfront investment.

Growing, selling and buying marijuana is illegal in Liberia, as in most African countries, but penalties are minimal and not enforced. Liberian law enforcement officials told VOA that they don’t have enough resources, or strong enough laws, to go after offenders.

“Currently, the laws on the book, in my view, are very weak,” said Flomo Weahma, the Liberian Drugs Enforcement Agency (DEA) local chief for central Liberia, where most of the country’s marijuana is grown. “And they are permissive of these acts that are perpetrated by criminals who continue to have these drugs in our communities, that have caused our children, our brothers, our fathers and our mothers to become addicted to these harmful substances.”

Liberian DEA officials said posting bail costs just $72 for drug crimes, and that is only if they are arrested and charged.

Moses Pewu is a marijuana farmer in central Liberia. He said he has been stopped many times by security personnel but has always been let go.

The UNODC says a quarter of the world’s marijuana is grown in Africa. It says up to 13.5 percent of the adult population uses it. This is higher than the global average of between two and five percent.

Experts say that marijuana has been grown and used in Africa for centuries, though recent data on production and seizures is scarce.

Pierre Lapaque is the UNODC representative for West and Central Africa. He said marijuana production in the region remains small-scale.

Lapaque said a more pressing threat in West Africa is transnational organized crime, which is more commonly associated with drugs like cocaine.

“As soon as it becomes a transnational market, then it becomes a criminal niche where you can make business. Then it is very serious and it starts impacting on the governments,” he warned. “And that’s where it is important for all governments to understand that they have to work not only by themselves, but with the international community in order to be able to address this problem.”

Liberian drug officials say local production and consumption of marijuana is a problem. Those involved in the trade said they couldn’t survive without it.

Farmer Tony Wesseh has been growing and selling marijuana in Liberia’s Bong County for more than five years.

“Yeah, I make money out of marijuana. I want to sustain my family with the money. I have my children going to school. They don’t have money to pay that tuition. That’s the only drugs I can think to sell to people who are in need of it,” he explained.

“You cannot take crime to be an income-generating activity. What is a crime is a crime,” he stressed. “To go into drugs does not justify one’s desire to make money because there are other cash crops that can make money as well.”

As African cities grow and Africa’s youth population booms in coming decades, the UNODC expects the number of marijuana users on the continent to rise as well, raising new challenges for drug control.