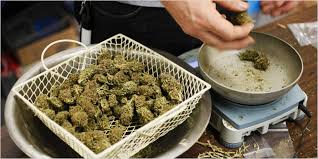 Hundreds gathered at Seattle Center for a New Year’s Eve-style countdown to 12 a.m., when the legalization measure passed by voters last month took effect. When the clock struck, they cheered and sparked up in unison.

A few dozen people gathered on a sidewalk outside the north Seattle headquarters of the annual Hempfest celebration and did the same, offering joints to reporters and blowing smoke into television news cameras.

‘‘I feel like a kid in a candy store!’’ shouted Hempfest volunteer Darby Hageman. ‘‘It’s all becoming real now!’’

Washington and Colorado became the first states to vote to decriminalize and regulate the possession of an ounce or less of marijuana by adults over 21. Both measures call for setting up state licensing schemes for pot growers, processors and retail stores. Colorado’s law is set to take effect by Jan. 5.

Technically, Washington’s new marijuana law still forbids smoking pot in public, which remains punishable by a fine, like drinking in public. But pot fans wanted a party, and Seattle police weren’t about to write them any tickets.

In another sweeping change for Washington, Gov. Chris Gregoire on Wednesday signed into law a measure that legalizes same-sex marriage. The state joins several others that allow gay and lesbian couples to wed.

The mood was festive in Seattle as dozens of gay and lesbian couples got in line to pick up marriage licenses at the King County auditor’s office early Thursday.

King County and Thurston County announced they would open their auditors’ offices shortly after midnight Wednesday to accommodate those who wanted to be among the first to get their licenses.

Kelly Middleton and her partner Amanda Dollente got in line at 4 p.m. Wednesday.

Hours later, as the line grew, volunteers distributed roses and a group of men and women serenaded the waiting line to the tune of ‘‘Going to the Chapel.’’

Because the state has a three-day waiting period, the earliest that weddings can take place is Sunday.

In dealing with marijuana, the Seattle Police Department told its 1,300 officers on Wednesday, just before legalization took hold, that until further notice they shall not issue citations for public marijuana use.

Officers will be advising people not to smoke in public, police spokesman Jonah Spangenthal-Lee wrote on the SPD Blotter. ‘‘The police department believes that, under state law, you may responsibly get baked, order some pizzas and enjoy a ‘Lord of the Rings’ marathon in the privacy of your own home, if you want to.’’

He offered a catchy new directive referring to the film ‘‘The Big Lebowski,’’ popular with many marijuana fans: ‘‘The Dude abides, and says ‘take it inside!’’’

‘‘This is a big day because all our lives we’ve been living under the iron curtain of prohibition,’’ said Hempfest director Vivian McPeak. ‘‘The whole world sees that prohibition just took a body blow.’’

Washington’s new law decriminalizes possession of up to an ounce for those over 21, but for now selling marijuana remains illegal. I-502 gives the state a year to come up with a system of state-licensed growers, processors and retail stores, with the marijuana taxed 25 percent at each stage. Analysts have estimated that a legal pot market could bring Washington hundreds of millions of dollars a year in new tax revenue for schools, health care and basic government functions.

But marijuana remains illegal under federal law. That means federal agents can still arrest people for it, and it’s banned from federal properties, including military bases and national parks.

The Justice Department has not said whether it will sue to try to block the regulatory schemes in Washington and Colorado from taking effect.

‘‘The department’s responsibility to enforce the Controlled Substances Act remains unchanged,’’ said a statement issued Wednesday by the Seattle U.S. attorney’s office. ‘‘Neither states nor the executive branch can nullify a statute passed by Congress.’’

The legal question is whether the establishment of a regulated marijuana market would ‘‘frustrate the purpose’’ of the federal pot prohibition, and many constitutional law scholars say it very likely would.

That leaves the political question of whether the administration wants to try to block the regulatory system, even though it would remain legal to possess up to an ounce of marijuana.

Liberties Union of Washington and served as the campaign manager for New Approach Washington, which led the legalization drive. She said the voters clearly showed they’re done with marijuana prohibition. ‘‘New Approach Washington sponsors and the ACLU look forward to working with state and federal officials and to ensure the law is fully and fairly implemented,’’ she said