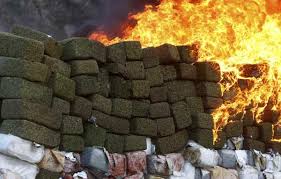 $1.5B worth of marijuana confiscated in Appalachia

You’d have to be an idiot to ruin this much ganja.- UA

FRANKFORT, Ky. (AP) – Federal, state and local law enforcement agencies confiscated more than $1.5 billion worth of marijuana this year in Appalachia, a region where widespread unemployment may be enticing some people to grow pot to support their families.

Shemelya said nearly 430,000 of the marijuana plants were found in Kentucky. Preliminary figures showed more than 192,000 plants confiscated in West Virginia and more than 147,000 in Tennessee.

Officials say the Appalachian region has a near-perfect climate for marijuana cultivation, plus remote forests that help growers camouflage their crops.