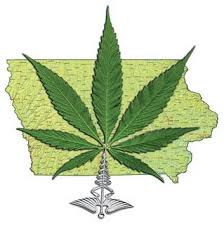 DES MOINES, Iowa (AP) — Bills that would decriminalize marijuana and approve its medical use may be headed for the Iowa Legislature after voters in Colorado and Washington decided that adults should be allowed to possess small amounts of taxed and regulated pot for recreational use.

Iowa state Rep. Bruce Hunter, D-Des Moines, is preparing a bill that would decriminalize pot possession as long as those caught with it weren’t selling it, he told The Des Moines Register ( ).

Both measures likely will face tough opposition in the next session, which begins in January.

An aide to House Speaker Kraig Paulsen, Josie Albrecht, said that “as with past efforts to legalize marijuana, House Republicans are unlikely to support the measure and do not believe it is a priority.”

Gov. Terry Branstad has said he’ll veto any bill that would legalize marijuana in any capacity.

Nonetheless, Steve Morrow, president of the Iowa chapter of the National Organization for the Reform of Marijuana Laws, said the success of the Colorado and Washington measures is “helping the cause.”

Legislators who risk voters’ wrath for advocating reform of pot laws now have the new Colorado and Washington laws to wield in defense, Morrow said.

They could use the help, said Bolkcom, D-Iowa City.

“They’re nervous about a vote somehow being used against them when they run for re-election,” Bolkcom said. “I think Iowans are ahead of their elected officials on this issue.”

Iowa has been tough on marijuana users. Possession of any amount is a misdemeanor that carries a mandatory minimum sentence of six months in jail and/or a fine of up to $1,000.

Hunter said he’d like to legalize marijuana completely and relieve its burden on the state’s justice system.

“We’ve got a prison population that is made up of a lot of people that haven’t really committed a violent crime, other than smoking some marijuana,” Hunter said. “It doesn’t do anybody any good. We’re not fixing a drug problem by sending people to jail with a bunch of other drug problems.”

But Peter Komendowski, president of Partnership for a Drug-Free Iowa, said decriminalizing and legalizing marijuana makes it tougher to protect children from the dangers of drug use.

“What we’re doing is sending a mixed message to our kids that some drugs are OK and some aren’t OK,” Komendowski said. “If you know kids, it’s extremely confusing to them if you’re not on message.”