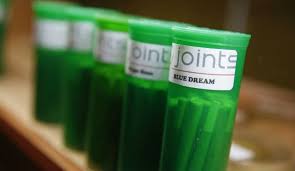 Competition is expected to be fierce for the 35 licenses for nonprofit dispensaries allowed by the law. Would-be marijuana magnates from Nantucket to Northampton have already started to round up capital and seek legal advice.

“There are well-heeled businesspeople at country clubs on Cape Cod, discussing how to fund businesses and how to make sure there are licensed dispensaries both in Hyannis and in Provincetown,” said Allen St. Pierre, executive director of the National Organization to Reform Marijuana Laws.

St. Pierre, who is originally from Massachusetts, said he has been fielding hundreds of calls, including from his own family members, about how to enter the business in Massachusetts since voters passed a ballot question on Nov. 6 legalizing medical marijuana in this state.

The medical marijuana industry generated $1.7 billion in revenue nationwide last year, and is expected to grow to $8.9 billion by 2016, according to SeeChange Consulting Inc. of Olney, Md.
110712-medical-marijuana-packaged.JPG Medical marijuana is packaged for sale at the Northwest Patient Resource Center medical marijuana dispensary in Seattle. Associated Press

Some of the urgency here comes from the relatively small number of dispensaries authorized by the state’s ballot initiative, which makes Massachusetts the 18th state to legalize medical marijuana. In Arizona, which has a similarly sized population, 126 dispensaries have been authorized. Meanwhile in Colorado, there were more than 400 dispensaries in operation last year.

But dispensaries represent just one potential business opportunity. Those directly growing and selling medical marijuana will need legal advice, and one law firm with offices in Northampton and Boston is already marketing itself as “Massachusetts Medical Marijuana Lawyers” with a banner on its website. Evans Cutler is fielding calls from those seeking dispensary licenses, doctors wanting advice about joining the roster of physicians prescribing marijuana, and municipal officials concerned about dispensaries opening in their towns.

“New England is now becoming a medical marijuana zone, with laws in every state but New Hampshire,” Evans Cutler partner Mike Cutler said. “We feel confident that federal law enforcement is not going to take much interest in Massachusetts, given that Washington and Colorado have just decriminalized recreational marijuana use.”

Other business opportunities include marijuana gardening techniques, packaging, quality testing, inventory management and making marijuana-infused food products. A handful of out-of-state companies with footholds in these businesses have big plans for Massachusetts.

“I’ve been to Massachusetts four times this year, including twice to Nantucket, where there is a lot of interest,” said Tripp Keber, managing director of Dixie Elixirs and Edibles, a Denver company that makes food products infused with cannabis oil for the medical marijuana market.

Keber said he is seeking a licensing partner in Massachusetts to distribute Dixie products here. The state law forbids dispensaries from selling cannabis without growing at least some of it, Keber said. Moreover, marijuana can’t be transported across state lines, so Dixie must partner with a local dispensary by providing all the food ingredients and intellectual property for the recipes. The local partner must mix up the products for sale, including their homegrown pot. Dixie, and Red Dice Holdings, which owns the IP portfolio, are both subsidiaries of parent company Medical Marijuana Inc.

Medbox Inc., of Hollywood, Calif., is busy setting up a new office in Natick, and is planning to hire two or three workers here. “Basically, this market is in the dark ages – patients pay cash and dispensaries hand over the marijuana in glass containers,” Medbox board member Vincent Mehdizadeh said.

Medbox offers a high-tech automated dispensing system that uses a patient’s fingerprint to unlock the system and dispense only the legal amount. Mehdizadeh said the company also has a small business serving the pharmaceutical market, but is mainly focused on highly regulated medical marijuana markets where dispensaries are required to document how much marijuana is dispensed and to whom. He plans to hold a demonstration for interested Massachusetts entrepreneurs in a few weeks.

Other out-of-state companies looking to get in on the action here include Buena Park, Calif.-based Greengro Technologies, which specializes in vertical plant-growing techniques, and Woodland Hills, Calif.-based Growlife Inc., which sells hydroponics horticulture products.

“Of course, Massachusetts will be part of our plans going forward,” Greengro CEO James Haas said. “In California, they blew out whole warehouses to use for dispensaries, and our technology helps grow more plants in less space.”

Growlife, meanwhile, is in the midst of launching new remote-controlled growing systems that allow growers to control lighting and temperature from their smartphones. The company has opened its first retail location in California, President Kyle Tracey said. He said he hopes to open more stores in newer markets like Massachusetts.

Medical marijuana business opportunities still come with significant risks, even as laws legalizing the industry sweep the nation. Mike Cutler, of Evans Cutler, said dispensaries would not be operational until 2014 in this state, at the earliest. In neighboring Rhode Island, which approved its medical marijuana law in 2006, there are still no dispensaries in operation, due to governmental and legal wrangling.

When will these ancient judges pass the torch to the compassionate?