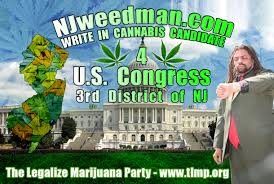 Monica Yant Kinney: Increasing acceptance of marijuana is not the end of the N.J. Weedman’s troubles

.Ed Forchion’s marijuana dispensary is again out of business after a cease-and-desist order.<

October marked the 75th anniversary of the first federal law criminalizing marijuana. In November, voters in Colorado and Washington legalized recreational use of the drug, joining 32 states and municipalities that embrace marijuana’s medicinal value or effectively ignore those who possess it in perfect health.

One of the nation’s most patriotic potheads, Ed Forchion, wanted to celebrate the Election Day victories, but the doors to his Los Angeles medical marijuana dispensary were locked. The infamous N.J. Weedman is again out of business after receiving another cease-and-desist from the U.S. Department of Justice.

“And I felt so legitimate here,” he laments. “I had a great new location directly across from a cancer center.”

Some dismiss Forchion’s misfortunes as made-for-media malaise, but I repeatedly return to his story because the Browns Mills man is a walking, jury-nullification-talking example of our nation’s weird war on one drug.

More than half of Americans support legalizing marijuana and regulating it like cigarettes and alcohol. But Congress and the president refuse to spend political capital on an issue that could generate much-needed revenue.

Earlier this fall, Forchion convinced a Burlington County jury that the pound of pot found in his car was for personal therapeutic use. Yet when we talked days after his big win, the oft-arrested activist predicted the feds would pounce when he returned to California. Even when high, the Weedman knows when he’s about to be taken down.

“United States law takes precedence over state law,” the letter read, “and applies regardless of the particular uses for which a dispensary is selling and distributing marijuana.”

Translation: Forchion and 70 other targeted operators may have filed paperwork with the city and state, but if the Obama administration wants them closed, they will close.

So federal law – which holds pot on par with LSD and heroin – trumps all? Yes and no, explains Allen St. Pierre of NORML, the nonprofit group lobbying to legalize marijuana.

“If you add it up,” he says, “130 million Americans live in a state or municipality with laws that deviate from federal law.”

Even Washington, D.C., disagrees with the White House, with the district passing a measure that taxes medical cannabis and makes it available to poor patients at a low cost. Put that in a pipe and smoke it.

In the decade I’ve known Forchion, he’s never sounded more resigned to lowering his profile. He’s too broke to fix his rig and return to trucking, too much of an iconoclast to work at Walmart. He’s a reality show in waiting, if only producers weren’t afraid of guilt by association.

So Forchion is reinventing himself as a hydroponic consultant to the stars, helping VIPs with medical cards legally cultivate a primo private supply.

“Do you know how many people out here want their own grow rooms?” he asks. “I built one for an NBA player. I did one for a Hollywood agent.”

Leave it to the Weedman to follow his bliss.

When I mention the career change, St. Pierre says it’s a good move for Forchion, if not for the movement that has often rolled its eyes at his antics.

“Ed is self-centered, but he has moxie,” St. Pierre says. “Marijuana wouldn’t have stayed prohibited for so long if we had a small army of Ed Forchions.”