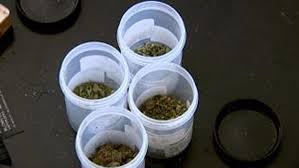 MONTCLAIR, N.J. (AP) – Across New Jersey, most communities approached about hosting one of the state’s first legal medical marijuana dispensaries in out-of-the-way industrial zones have just said no, after outpourings of public opposition.

Montclair is a different story.

The cosmopolitan suburb a half-hour train ride from Manhattan has not only allowed Greenleaf Compassion Center – which last week received the state Health Department’s first license to begin providing pot to patients – but also let the business set up in the middle of the town’s main drag, and with no fuss.

For plenty of people in the way left-of-center town, the situation is a source of both pride and nonchalance.

“Why are the other communities so closed-minded as to not accept something like that?” said Peter Ryby, owner of Montclair Book Store, around the corner and down the block from the not-yet-opened alternative treatment center.

The town of 38,000 is sometimes called “the Upper West Side of New Jersey,” referring to the famously upscale and liberal part of Manhattan, but it’s also reminiscent of well-heeled bohemian spots such as Boulder, Colo., and Berkeley, Calif. There’s an art museum, an international film festival, a Whole Foods, Thai restaurants, racks for commuters’ bikes, and the headquarters of Garden State Equality, New Jersey’s largest gay-rights group.

And the idea of tolerance is part of the town’s identity. In a scene in “Mad Men,” a TV drama set in the 1960s, characters who went to Montclair for a party were stunned to see black and white revelers together – and marijuana being passed around.

Medical marijuana is a dicey business. In the eyes of the federal government, the medicine is still an illegal drug.

Some patients say marijuana can ease symptoms associated with conditions ranging from multiple sclerosis to migraines. It has been used to treat pain, nausea and lack of appetite in cancer and AIDS patients.

Seventeen states and Washington, D.C., have flouted federal law and passed some sort of statute to allow patients access to the drug.

Each state has its own model for how the cannabis can be distributed. Some, like New Jersey – where advocates lament and some officials brag that the laws are the nation’s strictest – are still in a startup phase.

So far, nine states – Arizona, California, Colorado, Maine, Michigan, Montana, New Mexico, Oregon and Washington – have dispensaries operating. Some states are still setting up distribution systems, and some use home-grown marijuana or other setups that do not include dispensaries.

Chris Goldstein, a spokesman for both the Philadelphia chapter of the pro-pot group NORML and the Coalition for Medical Marijuana of New Jersey, has visited dispensaries all over the country. He said most of the storefront operations look more like the one ready to open in Montclair than those proposed in industrial districts of New Jersey.

“The dispensaries are in the higher-end neighborhoods of California towns. There are people who are wealthy and who are poor who need to access medical marijuana,” he said. “In New Jersey, it’s wherever the dispensary can get their location.”

New Jersey is not allowing registered patients to grow their own, and is limiting the potency, amount and variety of pot patients can buy. There’s a relatively short list of conditions that qualify patients for the drug, and unlike some more lenient states, chronic pain and anxiety aren’t on it.

Only New Jersey residents are eligible. New York, easily reachable by rail, does not allow medical marijuana, though lawmakers have proposed doing so.

Last year, the New Jersey Department of Health selected six nonprofit groups to pursue plans to grow and sell cannabis. The other five have struggled to find towns that will accept them, and none yet has permission to start growing marijuana, let alone sell it.

Groups are planning sites in Egg Harbor Township and Woodbridge. The other three groups have not announced their latest location plans.

Only Greenleaf has had a direct path. In its application, the group said it would meet patients in Montclair and grow its plants in another, undisclosed town. The group won’t say where, citing security.

A year ago, Janice Talley, Montclair’s director of planning and community development, found that the site on Bloomfield Avenue – next door to an abortion clinic and three buildings down from an adult video store that has pipes and vaporizers displayed for sale – would be a permissible for the new business under zoning laws.

Talley said she fielded complaints from some national anti-marijuana groups. “Nobody from the town called me and complained why we had that facility,” she said. “It wasn’t a huge issue here.”

Behind the counter at Health Love and Soul Juice Bar and Grill a couple doors down from Greenleaf, Jarisi Anderson, said he’s all for the new establishment. “It’s a beautiful thing,” he said.

His co-worker, Queen Townsend, fears the place could be a problem, but she believes she’s in the minority. “The people I’ve met in Montclair – I don’t want to stereotype – a lot of people here smoke weed,” she said. “They don’t have a problem with that.”

The guys smoking tobacco down the street at Fume, a cigar shop, said they aren’t troubled by legalizing marijuana – medicinal or not. “It’s a waste to lock somebody up for a nickel bag or a dime bag,” said shop owner Ralph Alberto.

But the dispensary could give the non-Montclair residents who go there to protest another cause.

Last week, Bernadette Grant stood across the street from the dispensary’s neighboring abortion clinic with rosary beads in one hand and anti-abortion pamphlets in the other. She said she considers medical marijuana in the same category as abortion.