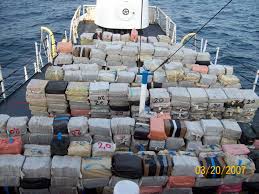 ST. PETERSBURG — A Coast Guard vessel returned to port Sunday with $36 million worth of cocaine and marijuana seized in overseas operations.

The Coast Guard cutter Resolute, a 210-foot ship, recovered the drugs during a 10-week deployment in the western Caribbean, according to a media release.

On Sept. 27, a patrolling Coast Guard helicopter spotted a 35-foot “go-fast boat” off the coast of Honduras. Four suspected drug smugglers jumped from the boat in an attempt to escape, the Coast Guard said. The Resolute‘s crew pulled the smugglers from the water and stopped the unmanned go-fast boat, where they discovered 53 bales of cocaine, weighing nearly 3,000 pounds and worth about $35 million. The Resolute turned the four smugglers over to U.S. authorities.

In another incident, the helicopter tracked a go-fast boat that ditched its cargo: 45 bales of marijuana, weighing about 1,500 pounds. The smugglers escaped into Nicaraguan waters, the Coast Guard said. The Resolute retrieved the $1 million drug load.

The Resolute‘s arrival Sunday to its home port in St. Petersburg coincided with another Coast Guard vessel’s return to Port Canaveral. The Confidence brought back more than 2,000 pounds of marijuana Sunday from counter-drug operations south of Cuba.