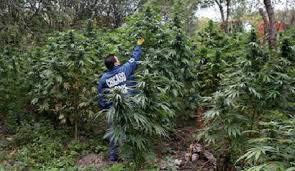 CHICAGO (AP) — In Chicago, a bustling urban metropolis where skyscrapers are as likely to sprout up as anything a farmer might plant, someone decided there was just enough room to grow something a little more organic: Marijuana.

The plants grew even taller than the tallest Chicago Bulls. However, just days before the crop on a chunk of land the size of two football fields would have been ready to harvest, a police officer and county sheriff’s deputy in a helicopter spotted it as they headed back to their hangar about three miles away.

On Wednesday, a day after the discovery of the largest marijuana farm anyone at the police department can remember, officers became farmers for a day as they began to chop down about 1,500 marijuana plants that police said could have earned the growers as much as $10 million.

No arrests had been made as of Wednesday, and police were still trying to determine who owns the property that housed the grow site on the city’s far South Side. But police said they were hopeful that because of the size of the operation, informants or others might provide tips about those involved, including a man seen running from the area as the helicopter swooped low.

James O’Grady, the commander of the department’s narcotics division, said they’ve never seen anything like it before, in part because Chicago’s harsh winters mean growers have a lot less time to plant, grow and harvest marijuana than their counterparts in less inclement places such as California and Mexico. The bumper crop was likely planted in spring, O’Grady said.

Add to that the urban sprawl: there are few spots in Chicago where such an operation could go unnoticed because of all the buildings, roads and residents. The growers took pains to ensure their crop was largely hidden by a canopy of trees and surrounding vegetation.

“Somebody put a lot of thought into it,” O’Grady said. “But they probably didn’t anticipate the helicopter.”

Chicago Police Officer Stan Kuprianczyk, a pilot, said police helicopters flew “over it all the time,” to and from their hangar, without spying the grow site. Yet somehow, a number of factors came together to allow Cook County Sheriff’s Deputy Edward Graney to spot the plants.

“We had the right altitude, the right angle, the right sunlight, and I happened to be glancing down,” said Graney. He said he initially spotted five plants or so through the trees before he asked Kuprianczyk to circle around for a closer look.

“We just happened to be right over a small hole in the trees and we looked down,” Kuprianczyk said.

They also happened to have the right training, Graney said, explaining that just a few weeks earlier a much smaller operation in suburban Chicago prompted them to fly over and videotape the scene so they might be able to recognize marijuana if they ever saw it from the air again.

So, by the time Graney spotted the marijuana plants, which are a much brighter shade of green than the surrounding vegetation, he had a pretty good idea what he was looking at.

Superintendent Garry McCarthy, whose officers are more used to intercepting shipments of marijuana grown elsewhere or discovering hydroponic growing operations inside buildings, said the discovery of the marijuana is significant in a larger fight against street violence.

Those involved with narcotics, whether it is marijuana, heroin or cocaine, purchase firearms with their profits and have shown they’re willing to use them to protect their business, he said.

“That’s where the violence comes in, the competition for the markets,” he said.