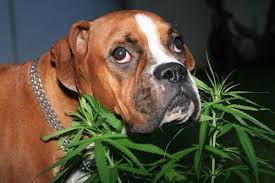 Dogs getting high on marijuana is an increasing problem in Colorado, vets say

Since medical marijuana was legalized in 2000, the number of dogs sickened by marijuana has quadrupled in the state, according to one study.

Pooches getting high on pot is an increasing problem in states like Colorado, where medical marijuana is legal.

Veterinarians say what used to be a rare problem is becoming alarmingly more common — and the results can be deadly.

“There are huge spikes in the frequency of marijuana ingestion [among pets] in places where it’s become legal,” veterinarian Dr. Debbie Van Pelt told CBS 4 in Denver.

When dogs get into their owner’s stash, they can get sick, staggering and vomiting.

“They basically [lose] a lot of their fine motor control, they have a wide-based stance and they are not sure on their feet,” said Pelt, who works at the Veterinary Specialty and Emergency Hospital in Englewood, Colo.

Dogs most commonly get stoned by eating their owner’s pot-enhanced foods. Dr. Stacy Meola, a veterinarian at Colorado’s Wheat Ridge Clinic said she saw two dogs die when they got into baked goods made with marijuana butter, commonly sold at dispensaries.

“[Marijuana] needs to be treated like any other drug,” Meola told CBS 4. “If you came home with a prescription of Vicodin from your doctor, you wouldn’t just leave it sitting there.”

The number of dogs that have gotten sick from marijuana has quadrupled in Colorado since the state legalized marijuana in 2000, according to a study by Meola.

While most dogs that ingest marijuana are back to normal within 24 hours of treatment, vets urge pet owners to keep the drug at a safe distance from animals.

DEA Marijuana Seizures On The Decline