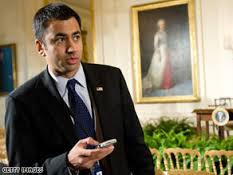 In an interview with Yahoo News, Kal Penn rebutted marijuana legalization advocates who argue that the president is being hypocritical by promoting “stoner humor” while busting pot distributors.

The “Harold and Kumar” actor, who has worked for the White House, emphasized that he was not his weed-loving movie character. “I’m not a marijuana expert,” he said.

But, he argued, “I think that the president’s been pretty consistent with that. He’s not in favor of legalization, we should be open about something like that. But what the president has done is take a really smart look at the Department of Justice and said, given the fact that the federal government has limited resources, we should be allocating them toward violent criminals and not towards non-violent criminals.”

Penn said the same discretion is at work in immigration reform, “where he’s going after and deporting violent criminals and making sure that if you’re a Dream Act eligible student that you know that you can apply for your deferred status.”

Legalization advocates (and many immigration advocates) would surely disagree. Obama’s administration has reportedly raided marijuana dispensaries far more aggressively than President Bush’s did, including many that are operating legally under state laws. The Obama administration has also been deporting more illegal immigrants than Bush. Despite an official focus on deporting criminals, his policies have been very controversial.