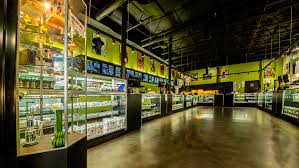 It is no secret that Harborside Health Center sells medical cannabis. Harborside sells lots and lots of it, according to United States Attorney Melinda Haag, who wants to shut down the dispensary’s two locations in Oakland and San Jose, in part because of Harborside’s sheer size.

Concourse Business Center, Harborside’s landlord in San Jose and the current target of an asset forfeiture proceeding filed by Haag, knew full well that HHC was in the business of selling weed (one need only watch a rerun of the Discovery Channel’s Weed Wars to see Harborside in action). Concourse just didn’t know marijuana was illegal, according to court papers filed this week.

In a motion filed in federal court Wednesday, Concourse — which is in the process of trying to evict Harborside from the property before the feds can take it — asked a federal judge to stop HHC’s marijuana trade. The move appears designed to keep the property out of the feds’ hands — but Harborside’s president Thursday pledged to stay put.

Already, Haag’s office has shut down more than a dozen dispensaries in the Bay Area since last October; she issued letters to the pot clubs threatening asset forfeiture and jail time if they didn’t close. Harborside — with more than 100,000 registered members, aka “patients” — would be the biggest haul to date for the feds, which has yet to seize any dispensary property in court.

Most of the other dispensaries agreed to leave their locations after discussions with the landlord, in some cases they left because their leases specifically stated that any violation of law, state, or federal, was cause for eviction.

Harborside’s lease has no such clause. In fact, the dispensary’s lease “makes it explicitly clear what our activities are,” said Steve DeAngelo, Harborside’s CEO. “They’re claiming that they believed [selling marijuana] was legal in the state of California. Now they’ve been informed [by the federal government] that it is not legal.”

In the papers filed this week, Concourse’s attorneys state that it has taken action “since learning that Harborside’s activity at the Property violates federal law.”

This maneuver is designed to help Concourse hold onto its property, DeAngelo said — plain and simple.

“It’s unfortunate — they’re in a difficult position,” DeAngelo said. “But we intend to remain in both of our locations to the best of our ability, with every single legal means at our disposal.”

It’s unclear what impact the injunction, if granted at a hearing scheduled for Oct. 11, would have on the forfeiture proceedings on Oct. 16. If granted, it would certainly put a damper on Harborside’s business — which might make any further lawsuits moot.