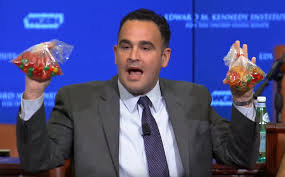 This week, The Huffington Post is doing a feature called “Shadow Conventions” where they address topics that neither the Democratic nor Republican conventions will address.  Today they took a look at the War on (Certain American Citizens Using Non-Pharmaceutical, Non-Alcoholic, Tobacco-Free) Drugs and my one non-pot-smoking friend Dr. Kevin Sabet appeared like Punxsatawney Phil on Groundhog Day to see his shadow and declare six more years of Drug War.  And like the movie Groundhog Day, the repetition of his fallacious anti-legalization arguments is beginning to sound like the opening to I Got You, Babe by Sonny & Cher. Let’s relive some of the classics:

Research uniformly reveals that under legalization, the price of drugs would fall substantially, thereby increasing consumption. Any taxes gained on legal drugs would be quickly offset by the social costs resulting from this increased use: witness how today society receives about $1 in alcohol and tobacco tax revenue for every $10 lost on the social costs of those two legal drugs. Increased drug use means increased costs, including those borne by American businesses as they deal with a high workforce, greater absenteeism and less productivity.

However, a Canadian study shows the social per-user costs of alcohol to be eight times greater and tobacco to be 40 times greater than the costs of a cannabis consumer.  Where a smoker cost Canada $800 and a drinker cost $165, a toker cost only $20. So whatever tokers cost America, we’re bearing that cost now with absolutely no tax revenues to offset it.  Bringing in some tax revenue combined with savings in law enforcement/court/prison expenditures could reap billions and more than offset any trivial social costs from marijuana use.

Furthermore, there is no guarantee that drug legalization would significantly diminish the underground market. In a legal market, where drugs are taxed, the well-established illegal drug trade has every incentive to remain. The drug trade is so profitable that even undercutting the legal (taxed) market price would leave cartels with a handsome profit. Drug legalization would also do nothing to loosen the cartels’ grip on other illegal trades such as human trafficking, kidnapping, extortion and piracy.

Hmm, drug cartels make money on human trafficking, kidnapping, extortion and piracy, so let’s continue to allow them to dominate the marijuana market as well.  I don’t care how much or how little it may or may not affect the cartels’ business model, I don’t understand why we give torturing kidnapping Mexican extortionist pirate terrorist organizations any profit from marijuana.

Where drugs are taxed and regulated, there is a gray market for those who’ll undercut the tax and regulations.  We see that in Manhattan, where profiteers transport van-loads of low-taxed North Carolina cigarettes to sell on the street corner.  We see that in Canada, where Americans cross the border to get cheaper prescription drugs.  In my state of Oregon, many Washingtonians cross into Portland to shop with no state sales tax.  But the reason marijuana cartels are in power is because they can take the risk and exercise the brutality necessary to prosper in a prohibition market.  When pot is legal to grow for personal use and sold with reasonable taxation, Mexican cartels are forced to play by the same business rules as American entrepreneurs, and the Mexicans can’t win in that environment.

What about criminal justice costs? Wouldn’t legalization at least decrease these? Surprisingly, legal drugs — especially alcohol — cause more arrests every year than illegal ones. Legal drugs are more available and therefore more abused. Driving while intoxicated, public drunkenness, and liquor law violations result in over 2.5 million arrests every year. That isn’t to say that current drug policies are not costly to the criminal justice system. They are. But that is precisely why we need smarter enforcement policies — not legalization, which would likely compound current costs.

Once again, alcohol is a toxic and addictive drug which causes in its users insanity, criminality, and death.  Of course there are more liquor law violations leading to arrest, because we arrest kids that try to use fake IDs, store clerks who sell to minors, bars that don’t card, and people who are drinking where they shouldn’t be.  Oh, and because alcohol is the most popular drug in the country, with about three-quarters of all high school seniors trying it at least once.  If marijuana legalization leads to another 850,000 arrests a year and, therefore, no cost savings, at least those arrests would be for people violating the law regarding supplying to minors, driving under the influence, or behaving in a criminal way that affects others — not merely possessing marijuana.

If Dr. Sabet’s reasoning makes your head hurt, try working through it backwards.  He says legalization of marijuana would increase abuse, thereby increasing arrests, thereby leading to more costs. So, then, if we returned to a strict new alcohol prohibition where anyone caught with a beer can be arrested and jailed, fewer people would abuse alcohol, we’d make fewer arrests for alcohol, and we’d have lower criminal justice costs for alcohol.

If that doesn’t work, whenever Dr. Sabet finishes a paragraph, just append one of the following taglines, as appropriate: