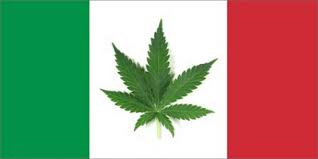 ROME — The police have discovered and seized a sprawling marijuana farm in a tunnel in the capital built during the era of Mussolini. The crop had an estimated street value of $3.7 million.

Officers with Italy’s Guardia di Finanza, the financial police, raided the passageway, near one of the Italian central bank vaults, on Saturday after a patrol on its regular rounds detected the strong smell of cannabis emanating from the entrance to a company that cultivated mushrooms in the abandoned tunnel, the police said on Tuesday.

When the officers climbed a ladder and peered over a makeshift wall at the back of the mushroom farm, the police said, they found a 43,000-square-foot tunnel housing the illegal crop.

Video footage released by the agency showed a section of the tunnel crammed with garbage bags filled with marijuana plants, vacuum-packed packages of marijuana and sophisticated greenhouses with top-quality lighting, ventilation and irrigation systems, where hundreds of cannabis plants were found in various stages of growth. Officers also found equipment and chemicals to process the cannabis. One man was arrested, but investigators say many more worked there.

“We found three or four work coveralls, chemicals that would be used by experts, as well as a blackboard with work shifts marked on it,” said Col. Stefano Corsi of the provincial branch of Guardia di Finanza, which oversaw the raid. “It was a regular business. It was a very sophisticated operation.”

Rome is crisscrossed with hundreds of tunnels and caverns. Most of these date to ancient times, when Roman builders excavated pozzolana, or volcanic material, which they used to build many monuments.

“There are kilometers and kilometers of passageways under many areas of Rome,” explained Marco Placidi, president of Sotterranei di Rome, a cultural association that carries out guided visits to underground sites. The early Christians later used some of these as catacombs to bury their dead.

Because the temperature in these grottoes and tunnels is constant throughout the year, many have been used in recent times to cultivate mushrooms, “though modern greenhouses are now more common because the tunnels are humid and inconvenient,” Mr. Placidi said. Even so, there are still a number of mushroom farms flourishing beneath the city.

The tunnel in question, located in a southeast corner of the capital, was built during the Fascist era for Rome’s budding subway system but was abandoned during the Second World War. Mussolini started building Rome’s first subway line in the 1930s.

Officers confiscated around 750 pounds of cannabis, Colonel Corsi said. “It was a very organized group which had invested significantly,” he said. Investigators believe that the organizers had decided to “extend their lucrative activity,” setting up other structures to grow cannabis, according to a statement issued by the Guardia di Finanza.

Mr. Placidi, of the underground guide group, said the tunnel was well known to archaeologists and had been on his list of places to visit. “I never went, and it’s just as well, given what was under there,” he said.