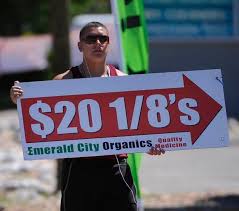 DENVER (AP) — Free joints! Cheap weed! Come on down! Marijuana advertising in Denver can be shockingly aggressive, with psychedelic billboards and sign wavers promoting potent weed and an affordable high.

But in-your-face advertising messages in Colorado’s largest city look like they’re on their way out after the city council voted 13-0 to ban outdoor advertising for medical marijuana.

The Denver ordinance passed Monday night seeks to curb the city’s vibrant and competitive marijuana industry. Council members said the city needs to crack down on the advertising.

“I don’t appreciate folks that are out in front of a creepy old van slinging this dope, and they’re making this industry look bad,” said Councilman Paul Lopez, who voted for the measure. “I’m sick and tired of my neighborhood being overrun by folks who don’t respect it.”

The advertising ban would apply to billboard, bus-bench and sidewalk sign-twirler advertising. The ordinance doesn’t affect print advertising or radio or television ads, but the ads would have to include the disclaimer that pot is “for registered Colorado medical marijuana patients only.”

The marijuana industry in Denver was itself deeply divided on the advertising ban, which requires one more vote next week but appears certain to pass.

One Denver group, the Medical Marijuana Industry Group, actively pushed for the advertising ban, saying that unseemly ads give people a bad impression of the industry. Other industry groups, including the influential Cannabis Business Alliance, argued unsuccessfully that the advertising ban goes too far.

“We don’t necessarily need sign spinners on the side of the road. But we do need to opportunity to educate,” said dispensary owner Cheri Hackett.

Marijuana advertising is a murky area for regulators dealing with an industry whose very existence violates federal drug law. Medical marijuana is illegal to grow and sell, and also illegal to advertise, but regulations vary widely in the 17 states that flout federal drug law and consider pot legal for people with certain medical conditions.

Delaware, Montana and Vermont ban marijuana advertising, though Montana’s ban is under legal challenge. Washington state bans physicians from advertising that they recommend the drug. Doctors that violate that state’s advertising ban can face sanctions from the state Department of Health.

“A health care professional shall not … include any statement or reference, visual or otherwise, on the medical use of cannabis in any advertisement for his or her business or practice,” Washington law reads.

California and Colorado, two states known for their vibrant marijuana industries, are flush with advertisements for the drug.

A U.S. attorney in San Diego last year vowed to crack down on companies that accept marijuana advertising in violation of federal drug law, but so far there have been no criminal charges brought. The U.S. attorney in Denver has told dispensaries near schools to close or face federal seizure, but he has not addressed advertising for the drug.

A California weekly newspaper that accepts marijuana advertising, the Sacramento News & Review, once published a stand-alone publication devoted entirely to marijuana ads. An editor said the federal saber-rattling scared away some advertisers, but didn’t affect the company’s intention to accept the ads.

“Our industry has been under constant scrutiny, and advertising is a big part of that,” Nicolazzo said. “It does kind of hinder us from going mainstream, to where we want to be.”

Nicolazzo said marijuana providers face tighter scrutiny than even alcohol and tobacco sellers, both of which have advertising limits.

“What’s the difference between advertising for marijuana or when you go to the gas station and they have sign for $1 off cigarettes? At nightclubs, they’re handing out shots. When you try to compare alcohol and tobacco, there’s a very thin line.”

“I don’t think any medicines should be advertised, period, end of story. Whether it’s medical marijuana or something that will give me an erection for eight hours, I find it all inappropriate,” said Frieling, head of Colorado’s chapter of the National Organization for the Reform of Marijuana Laws. “Ban it all or don’t ban any of it, singling out marijuana is just willful ignorance.”

“We are still allowing advertising. We just don’t want it in your face,” said Denver Councilman Christopher Herndon, who voted for the measure.