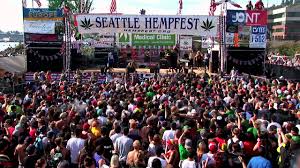 SEATTLE – Washington’s annual Hempfest – a three-day celebration of pot, bongs and hemp bead necklaces that is typically one of Seattle’s largest festivals – was uncharacteristically worked up Saturday over what should have been cause for laid-back cheering: a fast-gaining ballot initiative to legalize possession of small quantities of marijuana.

Ballot measures to legalize marijuana are sprinting toward the polls in three Western states in November. Marijuana supporters say Washington’s vote on Initiative 502 is important to maintain national momentum on an issue that is beginning to see steady gains in popular support.

But the pro-marijuana community here is deeply divided over the measure. Beneficiaries of the state’s medical marijuana law fear that legalizing and regulating pot use would subject pot patients to potential arrest under the measure’s strict impaired-driving provisions.

The result has been an undercurrent of discord amid the celebratory haze on the scenic Seattle waterfront. Dedicated pot proponents find themselves amazed to be in opposition.

“I never in a million years imagined myself to be on a stage advocating against the passage of a marijuana legalization law,” Steve Elliott, who writes the “Toke Signals” column for the Seattle Weekly, said at a civilized but highly divided debate on I-502 on the “Hemposium” stage.

Legalization measures also are on the ballot in Oregon and Colorado. Washington’s I-502 would eliminate civil and criminal penalties for possession of up to an ounce of marijuana for people 21 years and older and set up regulations for the substance to be taxed and sold at state-licensed stores.

Its most controversial feature – at least among marijuana proponents – is that it would set up a new driving standard based on a definable blood limit for marijuana. This is a stricter regulation than the current impaired-driving laws and one that many medical marijuana patients believe they would be unable to meet after regular medicinal doses.

They are fear they might be subject to arrest for driving even days after their last marijuana dose.

I-502 has gained substantial mainstream support in liberal western Washington, where Seattle’s mayor, its city attorney, several members of the city council, two former U.S. attorneys and the former special agent in charge of the local office of the Federal Bureau of Investigation have all come out in favor of it, along with a number of state legislators.

“Here’s what we know: Prohibition has not worked,” Mayor Mike McGinn told supporters who lazed in the grass a cloud of cannabis haze. “It’s fueled criminal violence. Right now in this city, people are murdering each other over pot…. It’s time to stop. It’s time to tax it, regulate it, legalize it.” Steve Sarich, a longtime activist in the medical marijuana community who heads the official campaign to defeat I-502, was not even invited to attend Saturday’s debate at Hempfest.

The opposition was instead left to Elliott and legislative analyst Kari Boiter to argue.

But so fractious has been the discussion within the pro-marijuana community that a spokesman for the group opposed to the law because of its concerns over how it would affect medical marijuana users was not invited to the debate.

The opposition was instead left to Elliott and a legislative analyst, Kari Boiter.

“They’ve locked us out of the debate,” Sarich said.. “But quite frankly, Hempfest is 250,000 people and 60 voters, so we don’t necessarily expect to make a whole lot of converts, because most of the people here don’t even vote.” “Never has an issue divided our community like 502,” said debate moderato Don Wirtshafter. “Hopefully, here we can use the Hempfest festival to work toward more energy, and what we can agree on.” The head of the campaign to pass I-502, Alison Holcolmb, urged the crowd to remember that it’s already a crime to drive while under the influence of marijuana.

But opponents said it is wrong to force a vote on an initiative about which so many are so deeply divided when a less controversial ballot measure might be taken up later.

“I don’t want to see another law on the books that police can use to harass us with,” Boiter said of the controversial driving provisions.

Keith Stroup, a co-founder of the National Organization for the Reform of Marijuana Laws, told the crowd that while the initiative was “not perfect,” it was important to capitalize on the momentum of three recent national polls that have shown 50 percent popular support or more across the nation for marijuana law reform.

“For the first time in the 41 years that NORML has been involved in legalization of marijuana, we actually have won the hearts and minds of the majority of the American public, and that is terribly important,” Stroup said.

He said wins in Washington, Colorado and Oregon could begin to provide the basis for pushing Congress, until now steadfastly opposed to ending marijuana criminalization, to start reconsidering.

“We need to have one or two or three states with the courage to stand up to the federal government and say, ‘To hell with you,'” he said. “This initiative, if it passes, and I fully believe it will, will forever be seen as the defiant step that led to the end of marijuana prohibition. They will be writing about this, folks, in history books for decades.”