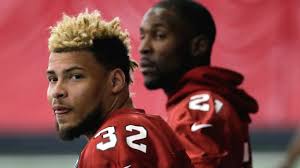 For Mathieu, the choice is marijuana or money

Tyrann Mathieu is 20 years old with the rest of his life ahead of him. His skill and dedication to football put him in prime position to become an NFL millionaire in the next year or two. But he must decide what he wants most, the money or marijuana.

Mathieu, a Heisman Trophy finalist as a sophomore last season for LSU, has entered a drug rehabilitation center since being dismissed last week from the team. That’s a great first step for the All-America defensive back, especially compared to transferring and playing elsewhere this season, which he considered.

He certainly had options. About 20 schools contacted LSU and asked for permission to speak with the player known as the “Honey Badger.”

But football can wait. It won’t matter where Mathieu goes next unless he quits smoking weed. Other schools and other coaches might be willing to take a chance — and reap the benefit of his talent in the meantime. Thankfully, Mathieu’s father realizes that his son getting clean is the No. 1 priority, not getting back on the field right now.

Tyrone Mathieu told ESPN on Friday that “there is no timeline” regarding his son’s resumption of college and football, although this fall remains a possibility. Tyrone Mathieu said his son is at the Right Step recovery center in Houston, where he’s being counseled by former NBA player John Lucas.

“Tyrann is focused on addressing his issues with Mr. Lucas. … Tyrann is working on discipline, maturity and character,” Tyrone Mathieu said.

Most 20-year-olds are able to do so without making national news. But playing for a national powerhouse like LSU put Mathieu under a spotlight that only grows larger at the next level. He would be wise to consider what a penchant for pot can lead to in the NFL.

Usage among college athletes is a growing concern, particularly since the introduction of synthetic marijuana. Mathieu has been linked to the substance, and other players have committed crimes or even died after using it. But synthetic marijuana is constantly evolving, and newer versions are hard to detect.

“We’re just now figuring out how to test for some of the original compounds,” forensic scientist Jeremy Morris told CBSSports.com. “If you’re a college student and you really like to do drugs and you don’t want to get caught, go ahead and use these. They’re not going to catch you.”

Smoking weed when you face drug-testing and your million-dollar job is at risk sounds crazy. Yet, former NFL player and current ESPN analyst Lomas Brown estimates that at least 50 percent of the league indulges. Recent media reports indicate increased usage among college football players in general and NFL prospects in particular.

“Marijuana use is almost epidemic, with more guys having tested positive for marijuana at some point in their college background than I can ever remember,’ ” a longtime team personnel man told Sports Illustrated. “It’s almost as if we are having to figure out a new way to evaluate it as part of the character and background report, because it’s so prevalent. There’re enough instances of it that it’s hard to know how to set your board. You can’t throw out that many guys.”

Mathieu rolled ’em up and rolled the dice until he got caught. He could’ve continued to take his chances at another school and hope the drug usage doesn’t affect his NFL stock. A much better plan is to kick the habit and not worry about failing tests anymore.

I don’t advise it, but players can smoke all the weed they like once their playing days are over. But risking their careers before they even begin makes no sense