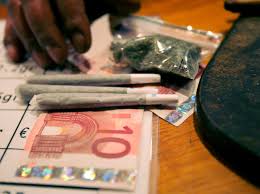 The Marijuana Trade In The Euro’s Birthplace

Maastricht, a town in the Netherlands, is known largely for two things.

This is the story of the troubled relationship between those two claims to fame.

The single currency, along with all the other reforms that make it so easy to cross borders in the Euro Zone, led to an influx of foreign tourists coming to Maastricht to get high.

“The name of our city is synonymous with cannabis,” Onno Hoes, Maastricht’s mayor, says. Hoes is unhappy about this. He says that the people who come to buy marijuana violate traffic laws, litter, and don’t spend money anywhere but coffee shops.

So he pushed through a bill that made it illegal to sell marijuana to non-Dutch residents.

You don’t have to show a passport to cross into the Netherlands from another country. But you need a passport to walk into a coffee shop in Maastricht.

Not surprisingly, the coffee shop owners, and many of the foreign tourists, are unhappy about the new rules.

Today, “maybe 30 or 40 people come into the shop” every day, says Stephan Korsten, who owns a coffee shop. That’s down from 1,500 a day before the new rules were put in place.

“Maybe I have to change it to a real coffee shop where you can drink coffee and eat some donuts or something,” Korsten says.

Most of the coffee shops in the city have shut down altogether.

“Our money is allowed to go to the Spanish banks,” says the owner of another shop. “But the Spanish pot smokers are not allowed to come to the Dutch coffee shops any more.”

Meanwhile, the illegal market for drugs is gaining popularity. Drug dealers like are selling marijuana again—not only to foreigners, but also Dutch residents who don’t want to register at the coffeeshops.

Stephan Korsten says it’s like in the old days, before the European Union, when his grandparents used to smuggle butter across the border.