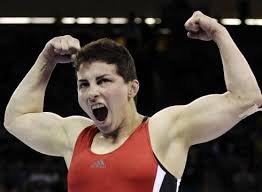 American wrestler Stephany Lee, who missed the Olympics because she tested positive for marijuana, was at home in Colorado Springs when she heard that judoka Nicholas Delpopolo had been thrown out of the London Games after failing a drug test he blamed on inadvertently eating food baked with marijuana.

Delpopolo is 23, the same age Michael Phelps was when the swimmer was photographed inhaling from a marijuana pipe in 2009. Phelps, who never failed a drug test, apologized, received a three-month suspension from USA Swimming and is celebrated as the most decorated Olympian in history.

“That was evidence that he does do that,” Lee said of Phelps during an interview with USA TODAY Sports on Monday. “And you’re still going to be able to achieve your dreams regardless. Look at him. He’s awesome. He’s the best athlete ever in the Olympics. It’s a double standard. If you already make a name for yourself, then what happens afterward really doesn’t matter. … I’d rather have my situation (of not going) than getting kicked out of the Olympic Village” like Delpopolo.

Lee said she and other Olympic athletes exhibit “camaraderie” in discussing with one another when best to stop marijuana use before expected testing. Lee estimated that at least “a good 50 Olympic athletes” use marijuana regularly before they stop in time for testing.

“We all regulate our consumption,” Lee said. “It’s not like we have to do a competition and we are continuously on this; that’s not how it works. We know when the tests are going to be because they come to the biggest events. A month before this I am not going to do this anymore, just for the simple fact that you’ll have to clean your system.

“We party just as hard as we train, especially when it’s over. People are going to do what they are going to do regardless. Just because there is a test on it doesn’t mean people are going to stop it. It just means they will change how they are using it and their consumption of it. I’m pretty sure that if athletes were to all party together — who wouldn’t, you know?”

When asked to comment on Lee’s characterization of marijuana use among U.S. athletes, U.S. Olympic Committee spokesman Patrick Sandusky said via e-mail: “The USOC fully supports the WADA (World Anti-Doping Agency) code, and we will follow up with this athlete about her comments.”

Lee is among those who think the perception of athletes who use marijuana is misguided. In the age of steroids and other performance-enhancing cocktails, the one drug that most think enhances performance the least is again at the center of the drug debate.

Society’s overall views on marijuana use continue to evolve, which leaves governing organizations, professional leagues and universities to grapple with the fact that marijuana has become the drug of choice for many athletes.

Under its new labor agreement, the NBA will test only for performance-enhancing substances — not marijuana — during the offseason. The use of marijuana among college athletes is on the rise, according to Frank Uryasz, president of the National Center for Drug Free Sport in Kansas City, Mo., which manages the NCAA’s drug-testing program as well as programs at more than 200 schools nationwide.

“We always say alcohol is the drug of choice for our college students,” Uryasz said in a telephone interview. “But marijuana would be second place then.”

At Kansas, an Overland Park man has been charged in a large-scale marijuana distribution ring, allegedly supplying the drug to men’s basketball players on the 2010-11 team. And three LSU football players — cornerbacks Tyrann Mathieu and Tharold Simon and running back Spencer Ware — tested positive for synthetic marijuana last season.

At TCU, four football players were kicked off the team after their February arrest; they pleaded guilty to marijuana delivery charges.

“Here’s what my problem is, just so you understand,” TCU coach Gary Patterson said. “I’ve told my kids all the time, I am not a righteous person. I don’t know if (marijuana) makes you right or wrong. But the law says it’s not legal, and I also know what it leads to. As a parent, as a coach, as a person in charge of young people, I also know what it leads to. So you’ve got to fix it or at least try to.”

It’s the NBA, however, where the perception of use seems to be greatest.

In a 2010 interview on Michael Irvin’s radio show, Josh Howard caused a stir by admitting to smoking marijuana in the offseason and saying, “Everybody in the sports world knows that NBA players do smoke marijuana.”

When out-of-season testing for pot was taken out of the collective bargaining agreement, it was greeted by a collective shrug.

In Lee’s case, she regrets that she did not stop in time before the April drug test. She said she typically used marijuana two to three times a week, depending upon how difficult practice was. She said it helped her fight insomnia, unwind and control her temper.

She knew marijuana would remain in her system for three months if she were not active because “it sits in your fat cells,” she said. Because she worked out often, she said she knew it would flush from her system quicker. She thought she would pass the test in April because she had stopped two weeks earlier. In the past, she had passed tests despite cutting off her usage closer to the test date.

Lee said that, if anything, marijuana use would hinder her ability to compete but that the public’s perception on marijuana use over decades has created a “negative mentality and closed-mindedness.”

“You can be a drunk and compete,” Lee said. “They are not going to crack you because you come into practice smelling like alcohol. They don’t test you for that. You can be completely alcohol intoxicated, and it’s not going to matter because nobody cares and it is legal.

Uryasz agrees with the notion that marijuana does not enhance performance, but he said it was important to test for it because it affects academic performance and “leads to all kinds of health and heavier problems,” not to mention that it is an illegal substance.

“Probably the greatest reason is that there is really a reduced perception of risk for marijuana use,” Uryasz said. “We tend to go through cycles in this country. Right now, we are just going through a cycle where we are seeing increased use in a lot of populations. I also think there is a greater societal acceptance of marijuana use.”

In 2010, there was a significant increase in daily use of marijuana among eighth-, 10th- and 12th-grade students, according to Monitoringthefuture.org, an ongoing study of the behaviors, attitudes and values of American teenagers. The rate for high school seniors is at its highest since 1981.

And across all levels, the high-profile sports of men’s basketball and football did not see the highest admitted use. Among men’s sports, lacrosse led the way with 48.5% of surveyed players admitting to using.

In women’s sports, field hockey saw 35.7% of those surveyed admitting to smoking marijuana.

Uryasz attributed those results partly to the fact that athletes in the money-generating sports of football and men’s basketball are drug tested the most frequently, which he thinks acts as a deterrent.

Uryasz said the NCAA tests for marijuana only at championship events, taking the position that each university is best positioned to regulate marijuana use among its athletes.

To that end, Patterson, the TCU football coach, said his players had been drug tested six times since February and 25 times in the last 18 months.

In general, Patterson said the social media age does not always look kindly at those in sports who might have been viewed more affectionately as renegades in the past if they could achieve on the field. There are no more off-the-field secrets.

“In this day and age, you can’t be Jim McMahon, Joe Namath, the Kenny Stablers,” Patterson said. “It’s hard to be those guys anymore. As soon as you walk out the door, somebody is following you around. That is just the way it is.”

In a statement, Delpopolo, who finished seventh in his event July 30, attributed his positive test to inadvertently eating food that he did not realize was baked with marijuana. Delpopolo apologized to the USOC, his teammates and fans, adding he is “embarrassed by this mistake,” and he pledged to rededicate himself to being the best judo athlete he can be.

Sandusky said in a statement: “Any positive test, for any banned substance, comes with the appropriate consequences, and we absolutely support the disqualification. We look forward to witnessing the continued success of our athletes and commend their dedication to clean sport.”

Back in Colorado Springs, Lee took issue with not being able to compete.

“Just because I (urinate) and it is in my system, it does not mean I was using it for competition use,” Lee said. “That’s where the conflict is for me. It is not performance enhancing. It does not damage me. If that is what works for me, it does not affect anyone else but me. I think it is (expletive).”