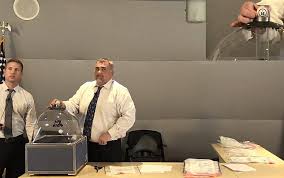 It’s been a busy couple of days in America’s weed world.

For starters, Arizona will hold a lottery tomorrow to pick medical marijuana dispensaries, according to The Associated Press.

Why will the state hold a contest, you might ask?

Though prescription pot is legal in Arizona, the Department of Health Services received 486 apps from individuals or businesses who want to open shops in 99 of the 126 designated dispensary areas — part of the Department’s long-term goals for its medical marijuana program.

However, in 75 of those 99 areas, more than one individual or business applied for a dispensary certificate.

So they’re doing a straight-up lotto — we’re talking ping pong balls chosen at random, for reals — to pick a winner.

The Department’s decision comes shortly after many of Arizona’s sheriff’s and county district attorneys demanded that Gov. Jan Brewer put the brakes on the state’s dispensary program, citing federal statutes against cannabis — which have caused confusion (read: a messy, messy clusterfuck) in California.

And in other bud-oriented breaking news, California Rep. Barbara Lee has sponsored legislation that would put an end to the federal crackdown on state medical marijuana operations, according to U.S. News and World Report.

Recall, also, that Ron Paul recently introduced the “Truth in Trials Act” in Congress, which would give legal protections to prescription pot users.