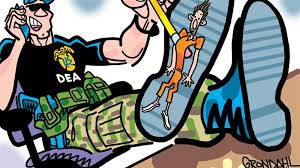 Truck owner wants DEA to pay up after botched sting

The phone rang before sunrise. It woke Craig Patty, owner of a tiny North Texas trucking company, to vexing news about Truck 793 – a big red semi supposedly getting repairs in Houston.

“Your driver was shot in your truck,” said the caller, a business colleague. “Your truck was loaded with marijuana. He was shot eight times while sitting in the cab. Do you know anything about your driver hauling marijuana?”

“What did you say?” Patty recalled asking. “Could you please repeat that?”

The truck, it turned out, had been everywhere but in the repair shop.

Commandeered by one of his drivers, who was secretly working with federal agents, the truck had been hauling marijuana from the border as part of an undercover operation. And without Patty’s knowledge, the Drug Enforcement Administration was paying his driver, Lawrence Chapa, to use the truck to bust traffickers.

At least 17 hours before that early morning phone call, Chapa was shot dead in front of more than a dozen law enforcement officers – all of them taken by surprise by hijackers trying to steal the red Kenworth T600 truck and its load of pot.

In the confusion of the attack in northwest Harris County, compounded by officers in the operation not all knowing each other, a Houston policeman shot and wounded a Harris County sheriff’s deputy.

But eight months later, Patty still can’t get recompense from the U.S. government’s decision to use his truck and employee without his permission.

His company, which hauls sand as part of hydraulic fracturing operations for oil and gas companies, was pushed to the brink of failure after the attack because the truck was knocked out of commission, he said.

Patty had only one other truck in operation.

In documents shared with the Houston Chronicle, he is demanding that the DEA pay $133,532 in repairs and lost wages over the bullet-sprayed truck, and $1.3 million more for the damage to himself and his family, who fear retaliation by a drug cartel over the bungled narcotics sting.

“When you start a new business, there are obvious pitfalls you go through, a learning curve,” said Patty, who before buying his two trucks worked in the pharmaceutical industry. “But who would ever be ready to deal with this?

“How am I — a small businessman, father of three, American Joe from Texas — supposed to make a claim against a federal agency that has conveniently shrouded itself behind a red, white and blue cloak of confidentiality and secrecy?”

Copies of letters and emails from Patty’s insurance company state that it won’t pay for repairs because the truck was part of a law-enforcement operation. Patty drew from his 401K retirement fund to repair the truck, which was out of operation for 100 days.

“I was not part of this,” he said. “I had absolutely no knowledge of any of it until after it happened.”

For its part, the DEA has not admitted that it was using Chapa as a spy because its official policy is not to comment on whether someone was an informant.

Lisa Johnson, a spokeswoman for the DEA Houston Division, confirmed that Patty’s demand had been received and noted that it would be investigated by the agency. But the Chronicle established Chapa was an informant based on interviews with multiple law-enforcement officials who spoke on the condition they not be named, and later by courtroom comments of prosecutors.

Patty’s request chronicles much of what he’s been through, including the operating costs for his trucks and everything repaired or replaced due to the attack. Among other disturbing chores was the need to hire a Spring-based company to clean up the mess in the cab caused by the killing.

Houston lawyer Mark Bennett, who is advising Patty, said if Patty’s initial claim is not resolved, the next step would be to sue.

Patty hired Chapa five weeks before the shooting and now wonders how many of the trips in the $90,000 rig included DEA work. GPS information from the truck reveals an unauthorized trek to the Rio Grande Valley in the days before Chapa was killed. He took a 1,000-mile round trip detour from the route he was supposed to travel.

Perhaps most unnerving, Patty says, is that drug mobsters now likely know his name, and certainly know his truck.

Panic at the Patty home these days can be triggered by something as simple as a deer scampering through the wooded yard or a car pulling into the driveway. One morning as his wife made breakfast, one of his young sons suddenly bolted across the house yelling, “Get the guns!”

A Bronco sport utility vehicle had pulled into the driveway past a broken gate. The dogs were barking in the darkness. Patty grabbed a pistol and headed for the front yard.

The Bronco pulled away, leaving a shiny object by the front walkway. It turned out to be the morning newspaper wrapped in a plastic bag reflecting a neighbor’s floodlight.

The whole ordeal has forced his children to grow up more quickly than he’d like, Patty said.

“I wanted to keep them young as long as I could,” he said. “I’ve gone to great lengths to keep my son believing in Santa Claus, and now I’m talking to him about death, mayhem and drug cartels.

“That is a huge canyon between the two.”

The truck has a new driver, but there’s still one bullet hole inside the truck’s cab. A chunk of seat cushion, sliced out as evidence, has been covered with a patch.

“I really do not worry about driving it,” said driver Norman Anderson – as long is it doesn’t involve a trip to South Texas.