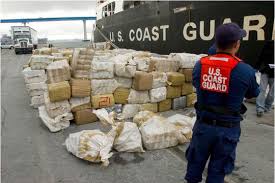 – If you ask me they prob should have just sank it.  -TG

The U.S. Coast Guard is boasting that one of its cutter crews seized 8,500 pounds marijuana off the coast of San Pedro this week.

That’s a lot of weed headed for a region where it’s essentially legal to sell it in storefronts. Makes you wonder.

Anyway, Coast Guard officials said the catch was worth …

… a whopping $7.7 million. The haul means that our friendly USCG men and women of the sea have tallied “a 50-ton milestone for waterborne marijuana seizures in Southern California and the Pacific Southwest border region this fiscal year,” according to a statement.

That’s nearly $91 million worth of weed. Wow. Did we mention that it’s basically legal to sell pot in California?

The Coast Guard says there has been an “increase” in, er, high-seas pot busts this year.

The seizure was made Wednesday by the San Francisco-based Coast Guard Cutter Aspen about 160 miles offshore, according to the USCG. (The Aspen patrols the entire California coast).

Petty Officer Cory Mendenhall told the Weekly the pot was found on a 33-foot “panga” boat that likely came from Mexico.

Six people on the boat were detained as the U.S. Department of Homeland Security investigates.

Stopping these drugs from reaching our streets is a great accomplishment, but it’s just the tip of the iceberg with respect to the impact on the drug trafficking organizations.

Gosh, has anyone bought weed on “our streets” around here in the last five years?