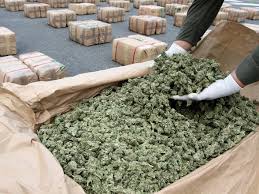 When it came to arresting marijuana growers last Thursday, Georgia law enforcement was literally on fire.

Wicker, a convicted felon, had begun burning the plants because he saw the police helicopter overhead, authorities said.

When a Georgia State Patrol trooper attempted to arrest the homeowner, nearby fires set the trooper’s pants aflame, according to the Atlanta-Journal Constitution. The trooper was treated for leg burns.

Officials say they discovered 19 marijuana plants inside the home, as well as two firearms. Wicker was arrested and charged with manufacturing marijuana, tampering with evidence, possession of a firearm by a convicted felon, and misdemeanor obstruction.

The biggest find on Thursday, however, occurred when officials in the helicopter spotted a 3-4 acre grow operation. The 12,887 plants seized by officials have an estimated value of over $15 million.

Miguel Angel Silva, 31, and Angel Adrian Ramirez, 19, were arrested after police caught them climbing over a fence half a mile away from the farm. The two men were later charged with manufacturing marijuana, according to the Associated Press.

All three men are being held without bond at Gilmer County Jail.