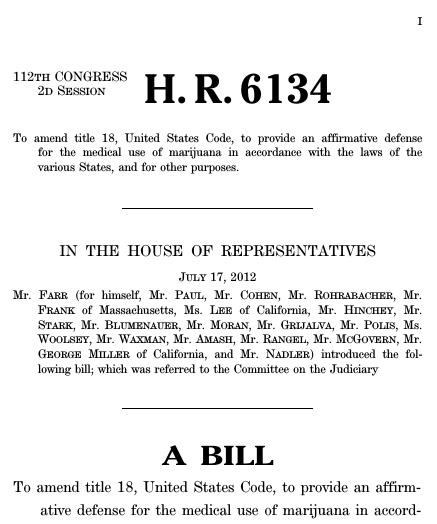 Washington, DC — Late yesterday, U.S. Representative Sam Farr (D-CA) and 18 co-sponsors introduced HR 6134, the “Truth in Trials” Act, bipartisan legislation to allow defendants in federal criminal prosecutions the ability to use medical marijuana evidence at trial, a right not currently afforded them. Because of a June 2005 U.S. Supreme Court ruling in Gonzales v. Raich, the government has the discretion to enforce federal marijuana laws even in medical marijuana states. The Raich ruling also allows federal prosecutors to exclude all evidence of medical use or state law compliance in federal trials, virtually guaranteeing the convictions of medical marijuana patients and providers.

“The federal government has tilted the scales of justice towards conviction by denying medical marijuana defendants the right to present all of the evidence at trial,” said Congressman Farr. “My bill would restore due process rights to law abiding citizens acting within the parameters of state and local laws. Juries should hear the entire story of a patient’s medical marijuana use before choosing to convict, not the heavily edited version they currently hear.”

The Truth in Trials Act is being introduced at a time of heightened federal activity on this issue. The Obama Administration has taken an unprecedented and overly-aggressive stance against medical marijuana, including hundreds of threats to criminally and civilly prosecute patients, providers, property owners, and even public officials attempting to pass their own public health laws. As a result of this policy, the Justice Department has indicted more than 70 people claiming to be compliance with state medical marijuana laws, which stands in stark contrast to earlier statements by Obama that he was “not going to be using Justice Department resources to try to circumvent state laws on this issue.”

“The federal government should be leaving enforcement issues up to the local and state officials who designed the medical marijuana laws in the first place,” said Steph Sherer, Executive Director of Americans for Safe Access, the country’s leading medical marijuana advocacy group and strong supporters of the legislation introduced today. “But, as long as the Justice Department is going to arrest and prosecute people in medical marijuana states, defendants ought to have a right to a fair trial.”

The Obama Administration has far surpassed the rate at which the preceding administration was indicting and prosecuting people for trying to implement a state’s medical marijuana laws. During the Bush Administration, scores of people were convicted and received staggering sentences of up to 20 years in federal prison, without the ability to properly defend their actions. Sherer argued that, “The ‘Truth in Trials’ Act will restore the balance of justice and bring fundamental fairness to federal medical marijuana trials.”

Most federal medical marijuana cases result in plea bargains due to the denial of a defense at trial. However, some defendants still choose to fight their charges. Charles C. Lynch ran a dispensary in Morro Bay, California, with the support of the City Council and local Chamber of Commerce, but he was raided, prosecuted and convicted in 2008 without a defense. Although Lynch was accused by the federal government of violating state law, he could not use evidence to refute this at trial. Lynch was sentenced under the Obama Administration, but is currently released on bail pending his appeal, which is currently before the Ninth Circuit.