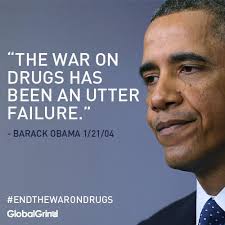 While Marc Ambinder’s much discussed, scantily-sourced GQ report of a second-term “pivot” runs through the murderers’ row of complaints against the Drug War—the cocaine/crack disparity; mandatory minimum sentencing; property-seizure laws and the fattening of the corrections industry—he doesn’t report that the president’s “aides and associates” have identified any of these as a starting point for Obama to “tackle” first.

“Don’t expect miracles,” Ambinder cautions, and that’s where he gets it wrong. The miracle has already happened. Here’s the answer that Ambinder’s anonymous sources failed to leak to him: the pivot point for Obama’s new direction is homegrown marijuana, and it’s already started.

The presidential request for the FY13 budget deals a mortal blow to the helicopter-powered marijuana eradication umbrella. It does so by cutting in half the funding for the U.S. National Guard Counterdrug program, the Defense Department’s contribution to the marijuan-eradication effort that has, for the past 20 years, limited the size of domestic marijuana patches and increased the demand for “blood pot” imported by ultraviolent Mexican drug cartels—while doing nothing to stem the supply to anyone who wants to get high.

Until now, the DEA and state law enforcement could count on the National Guard to fly hundreds of helicopter hours over national forests and other public land, where growers became active following the passage of property-seizure laws in the Reagan years—but the FY13 budget changes that.

The 50-percent cut is not being apportioned evenly across the states—it’s a two-thirds cut in Oregon and a 70-percent cut in Kentucky, while the Southern border states are receiving less severe reductions in funding. It’s essentially a diversion of Defense Department assets away from the interior American marijuana fields to where the national-security risk is greatest: along our Southern border.

“We’re not going to have legalized weed anytime soon,” the president told late-night television host Jimmy Fallon in April. But there’s a lot a president can do to unwind the marijuana prohibition without going full-on Peter Tosh. After all, how effective is an umbrella with holes in it?

Without a fully functional eradication program, the feds cannot keep domestic pot production down. So even if it remains illegal, domestic production could boom during FY13, the first growing season of Obama’s potential second term.

The road map to pot decriminalization, an essential first step for any pivot on the drug war, can be found in the executive order President Obama issued on immigration to effectively implement components of the DREAM Act without the help of Congress by ordering his executive branch to de-prioritize enforcement of certain laws.

The simple fact that President Obama would even consider breaking the taboo of the marijuana prohibition is itself a miracle, given that our last president from the Democratic Party gave us the 1996 federal three-strikes law, which remains one of the most outrageous components of the pot prohibition, sending nonviolent marijuana growers to prison for life without parole for the offense of persistent criminal farming.

When Obama makes public his drug-war pivot, he will have 40 years of an abusive relationship between the Oval Office and marijuana to undo. When Ambinder says that drug laws in America “were created almost nakedly to marginalize disfavored groups,” what he’s talking about in part is how President Nixon doubled down on the already-in-place marijuana prohibition on the morning of May 26, 1971.

“I want a goddamn strong statement on marijuana,” Nixon told his chief-of-staff, Bob Haldeman. “I mean one on marijuana that just tears the ass out of them … By God we are going to hit the marijuana thing, and I want to hit it right square in the puss …”

President Reagan followed suit with a massive expansion of the federal government’s powers in matters of drug-related justice: eliminating federal parole; creating mandatory minimum sentences, and allowing federal agents to seize land and property from people merely suspected of being involved in “drugs,” whether those drugs were marijuana or heroin, in complete disregard of the suspect’s Fourth Amendment protections.

When Obama makes public his drug-war pivot, he will have 40 years of an abusive relationship between the Oval Office and marijuana to undo.

Any détente of the drug war that Obama might tackle in his theoretical second term must include, eventually, a massive legislative package that returns America to a pre-Nixon posture on pot; flattens the cocaine/crack disparity; eliminates mandatory minimum sentences; re-instates federal parole for nonviolent and victimless crimes; reins in property-seizure laws; grounds the fleet of pot-spotting helicopters; and grants blanket clemency for those currently serving federal prison time for trumped-up marijuana crimes.

In other words, in his second term, President Obama needs to kick Richard Nixon right square in the puss. In the meantime, by easing enforcement of domestic marijuana cultivation, thereby reducing demand for Mexican blood pot and freeing up Defense Department assets to send to the Southwest, the president can achieve another of his campaign promises: improving our border security.