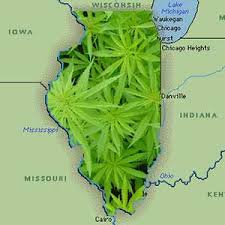 Illinois  is a big state, what about everyone else? -UA

(Reuters) – People caught with small amounts of marijuana in Chicago will be ticketed instead of arrested under a new ordinance passed by the city council on Wednesday, as the third largest U.S. city became the latest to support more lenient penalties for using the drug.

The council voted 43-3 in favor of the measure, which was backed by Mayor Rahm Emanuel.

Under the ordinance, police in Chicago can issue a written violation with a fine of between $250 and $500 for possession of 15 grams (0.5 ounces) of marijuana or less rather than make an arrest.

More than a dozen U.S. states and several large cities have already taken similar steps. Two states – Colorado and Washington – will ask voters in November whether to go further and legalize recreational marijuana.

Supporters said the Chicago measure, which takes effect on August 4, would help raise revenue for the city, save money and free up police to pursue more serious crimes. However, council member Roberto Maldonado, an opponent, said people will interpret the law as “a license to smoke marijuana in public.”

Chicago Police Department statistics indicate that last year there were 18,298 arrests for possession of less than 10 grams (0.35 ounces) of marijuana, according to a statement from the mayor’s office.

Each case now involves about four police officers – two arresting and two transporting officers – and places an additional burden on the Cook County court and jail system, the council said. Most cases are dismissed.

The issue of deploying police to handle more serious crimes is particularly pressing this year in Chicago, which has seen a 37 percent spike in its murder rate.

“I want a full court press on the street,” Emanuel said, adding that Chicago “cannot afford to take our officers off the streets for hours at a time only to see over 80 percent of the marijuana cases dismissed in court.”

Supporters of the city ordinance argued that marijuana arrests disproportionately targeted minorities and a conviction could make it difficult to find a job.

“If you had been white and/or privileged, a small amount of marijuana had already been decriminalized, because the only people who have been arrested for these types of crime have been black and brown individuals,” said Alderman Howard Brookins.

Fifteen states have reduced the penalty for possession of limited amounts of marijuana, according to Allen St. Pierre, executive director of NORML, a group lobbying to legalize the drug.

Other cities with similar policies include Seattle, Pittsburgh and Philadelphia, as well as university towns like Champaign, Illinois, and Madison, Wisconsin. Seventeen states and the District of Columbia have legalized medical marijuana.

Opponents of decriminalization say it condones drug use and results in a lost opportunity for intervention to stop it.

The Chicago ordinance would not halt arrests in all cases. Anyone caught with marijuana on school grounds or in a park would still be subject to arrest. Children under the age of 17 and anyone without proper identification could also be arrested.