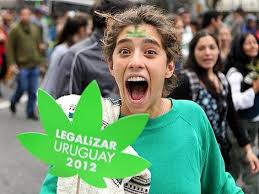 Uruguay’s government has opted for the “regulated and controled legalization” of marijuana in the South American country as a crime-fighting measure and pledged to lobby against the current global drug-war strategy in international forums.

The prohibition of “certain drugs” in Uruguay is creating “more problems than the drugs themselves,” Defense Minister Eleuterio Fernandez Huidobro said Wednesday, noting that other similar situations in neighboring countries have had “disastrous” consequences.

The minister referred to the “dramatic situation” triggered by drug trafficking in “other Latin American countries such as Mexico, Honduras, El Salvador, Nicaragua, Colombia, Brazil, and now it’s starting in Ecuador.”

“We don’t want the same thing to happen to us in Uruguay,” the defense minister said.

The administration of President Jose Mujica, currently in Brazil for the Rio+20 environmental summit, will “fight (in) all the international forums” for the legalization of marijuana, Fernandez Huidobro said.

The defense minister announced the decision to legalize the psychoactive drug at a press conference, in which he was joined by presidential secretary Alberto Breccia, Interior Minister Eduardo Bonomi and Social Development Minister Daniel Olesker.

It will now be “Uruguayan foreign policy” to combat the “prohibition (of consumption) begun in 1971 by the erroneous decision of former U.S. President Richard Nixon, who brought about the current disaster” by “declaring a war that’s been won by the narcos,” Fernandez Huidobro said.

Marijuana consumption was already tolerated in Uruguay, but now Mujica’s leftist Broad Front government plans to overhaul existing legislation barring its production and sale and has the necessary votes in Congress to do so.

Marijuana “will be planted by the country’s farmers,” the defense minister said, adding that the state-regulated system will undermine illegal drug dealers.

The government says regulation of marijuana sales would help combat consumption of cocaine paste, a drug that is more powerful and addictive and which is blamed for a rise in juvenile delinquency in the South American country.

For Safe and Effective Drug Policy, Look to the Dutch