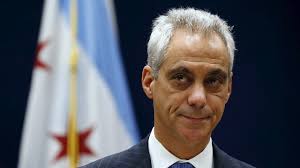 Mayor Rahm Emanuel is throwing his formidable support behind a plan to decriminalize small amounts of marijuana.

If the City Council goes along, Chicago cops will be free to issue a ticket with a fine ranging from $100 to $500. The tickets would apply to people caught with 15 grams of pot or less.

Currently, those caught with small amounts of pot face a misdemeanor charge punishable by up to six months in jail and a $1,500 fine.

In a press release, the mayor said writing pot tickets “allows us to observe the law while reducing the processing time for minor possession of marijuana — ultimately freeing up police officers for the street.”

Emanuel chose to wade in on the hot-button issue while in Prague for his daughter’s Bat Mitzvah. That allows him to avoid questions about whether marijuana tickets would send the wrong message to kids about a drug that some consider a “gateway” to more dangerous substances.

In 2011, Chicago Police officers made 18,298 arrests for possession of less than 10 grams of marijuana.

A Chicago Sun-Times analysis last year showed most minor pot cases get dismissed. For every 10 misdemeanor marijuana cases that went to court in Cook County between 2006 and 2010, about nine cases were dropped, the newspaper reported last year in a series about pot.

Bruce Talbot, a retired Woodridge police officer and a drug expert who lectures on narcotics, said “many of the Chicago suburbs have been issuing tickets for marijuana for many, many years.”

If Emanuel’s proposal goes into effect, the number of minor marijuana cases in the city could jump — providing more revenue for the city’s coffers, Talbot said.

“My gut tells me police officers are going to be more likely to enforce the law if it’s simple,” he said. “Obviously, writing a citation is simpler for the officer than having to go through the lengthy, cumbersome process of a misdemeanor arrest.”

“I don’t believe the mayor or the police chief in Chicago finds it acceptable for people to stand on Michigan Avenue or State Street and smoke pot,” he said. “But it would not be good if this gives the impression that the government views marijuana as innocuous.”

Solis was overjoyed by the mayor’s endorsement.

He said it would free scores of officers to focus on the more important fight against gang crime that’s driving the surge in homicides and shootings.

“Up to four police officers are involved in this kind of arrest,” Solis said. “They take two hours to process these individuals. That’s not counting the amount of time they spend in court. That’s a big winner for me. We’ll be able to get more officers into our neighborhoods.”

Emanuel’s proposal comes as the city’s homicide rate has spiked 35 percent so far this year and last weekend saw a troubling return of downtown mob attacks.

Solis also said ticketing people for pot won’t stigmatize them like a misdemeanor arrest does.

“The people we’re hurting are primarily young African Americans and Hispanics who, for a minor offense like this, can have a stain for the rest of their lives that will affect future jobs, schooling and, in some cases, their ability to get housing,” the alderman said.

Last fall, Emanuel said he would not be rushed into decriminalizing possession of small amounts of marijuana because doing so creates its own set of problems that other cities have been forced to correct.

“This issue has two parts to it, not one. The first part, which is what’s motivating people, is the issue of the cost in the system: arresting, overtime, court, jail. Then, there’s also the criminal-justice side. I have to evaluate and will evaluate both — not one or the other,” the mayor said then.

When Solis introduced the ordinance last fall, he was joined by eight other aldermen. They pointed to a Sun-Times series that showed Mexican drug cartels were supplying the bulk of the marijuana on Chicago streets and that grass sales were bankrolling the rest of their drug operations.

“Similar to Prohibition, I would submit that the less criminal a drug or controlled substance is, the less likely that big cartels and violence is going enter the system,” Ald. “Proco” Joe Moreno (1st) said on that day.

To bolster the case to decriminalize small amounts of pot, Solis distributed arrest figures for the last decade. The totals show the disproportionate number of minorities arrested for marijuana possession.

On the lower end of the spectrum, the North Side’s mostly white 32nd and 43rd wards had 719 and 529 arrests respectively during that time. DePaul University straddles both wards.

The second lowest number of arrests over the decade — 533 — occurred in the Northwest Side’s 41st Ward, which includes O’Hare Airport.

If Emanuel can muscle the ordinance through the City Council, Chicago will join a parade of other cities and states that have taken the plunge.

The states include: Alaska, California, Colorado, Connecticut, Maine, Massachusetts, Minnesota, Mississippi, Nebraska, Nevada, New York, North Carolina, Ohio and Oregon. Locally, Evanston, Normal and Champaign are among those that have done the same.

Former Mayor Richard M. Daley flirted with the idea of issuing marijuana tickets, only to drop the issue like a hot potato after critics questioned whether society was ready for what seemed like a step toward legalization of pot.