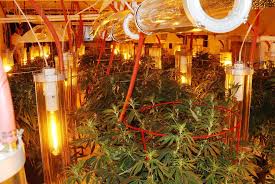 GRANTS PASS — The owner of a Grants Pass bicycle shop has become the first registered medical marijuana grower in Oregon to be convicted on federal charges since the U.S. attorney’s office started cracking down on abusers of the state law.

Authorities said Jason Michael Scott Nelson, 36, was one of four medical marijuana growers from Southwestern Oregon who pooled their harvests and made monthly shipments from Portland to Boston in pods loaded with furniture bought from Goodwill. The other three faced state charges.

“Our hope was to expose the lie about these huge operations that are just benevolently supplying medicine to sick people,” said Amanda Marshall, U.S. attorney for Oregon. “Now we have the opportunity with this conviction to be able to have one more bit of evidence out there so people can be thinking critically whether or not this is what they want in their communities.”

A U.S. District Court jury in Medford convicted Nelson on Friday of conspiracy to grow and sell more than 100 marijuana plants, growing more than 100 marijuana plants, and possession of unregistered machine guns, silencers and short-barreled rifles. The jury also found that his house in a rural area outside Grants Pass should be forfeited as part of an illegal drug operation.

A judge on Monday ordered Nelson held pending sentencing on Aug. 13. The jury also found his house should be seized as part of an illegal drug operation.

Nelson was arrested in May 2011 based on information stemming from the arrest of a woman shipping 74 pounds of pot from Portland to Boston in a load of furniture, said Grants Pass police Detective Ray Myers of Rogue Area Drug Enforcement.

After state police arrested Elizabeth Saul of Selma in Portland, she told investigators about three men providing marijuana to her, and one of them led investigators to Nelson, Myers said. The marijuana was selling for $2,400 to $2,700 a pound and the group had made two other shipments.

Authorities said that when investigators searched Nelson’s property, they found a room elaborately set up for growing marijuana, mature and immature plants, and another room hidden behind a gun safe that contained 29 heat-sealed packages of trimmed marijuana buds. Investigators also found the illegal firearms.

Richard Michael Sherman testified that he passed marijuana from Nelson on to Saul. Sherman said he worked in Nelson’s bike shop, trimmed marijuana buds for him and lived rent free at a house next to his. Sherman pleaded guilty three weeks ago to a federal charge of conspiracy to manufacture marijuana and testified against Nelson. He has yet to be sentenced.

Nelson testified that he was registered with the state to grow marijuana for four patients, and that only 6 pounds of the packaged marijuana was his.

At harvest time last fall, federal agents heaped hundreds of plants on dump trucks and hauled them away from five large cooperative medical marijuana gardens in Jackson County, which lies at the tip of the Green Triangle of prime marijuana growing country in Northern California and Southern Oregon.

Medical marijuana advocates have said they are eager to work with federal authorities to control the illegal sales of medical pot, because they reduce supplies available to qualified patients.

Oregon was one of the first states in the nation to make it legal to grow and use marijuana for medical purposes. Since then, marijuana advocates failed to win passage of a measure to make medical marijuana available to patients through dispensaries, but hope to qualify a measure making marijuana legal for the November ballot.